Posted on July 12, 2015 by Craig Wieczorkiewicz

Cleveland Indians prospect Ryan Merritt pitched a seven-inning no-hitter for the Double-A Akron RubberDucks on Saturday. He needed only 78 pitches for his gem, which included three strikeouts and a walk.

Stanley on fire for Redbirds

St. Louis Cardinals prospect Cody Stanley drove in a run for the Triple-A Memphis Redbirds on Saturday, giving him 12 RBI in his last seven games.

Another 10-win season for Buehrle

His streak began in 2001, his rookie season with the Chicago White Sox.

Former Texas Rangers closer Neftali Feliz made his first appearance for the Detroit Tigers on Saturday, pitching a scoreless 8th inning. The Rangers designated him for assignment on July 3 after the righty posted a 4.58 ERA and a 1.678 WHIP in 18 relief appearances.

On Friday, the Kenosha Kingfish of the Northwoods League hosted about a dozen alumni of the Kenosha Twins, a Midwest League team from 1984 to 1992.

I was there Friday and got to meet Webster briefly before the game. I was impressed by his upbeat personality and willingness to sign lots of autographs for fans.

The Kingfish — who beat the Madison Mallards 14-5 that night — play at Simmons Field, the same ballpark the Kenosha Twins called home. The K-Twins won Midwest League championship titles in 1985 and 1987 before the franchise moved to Fort Wayne after the 1992 season. 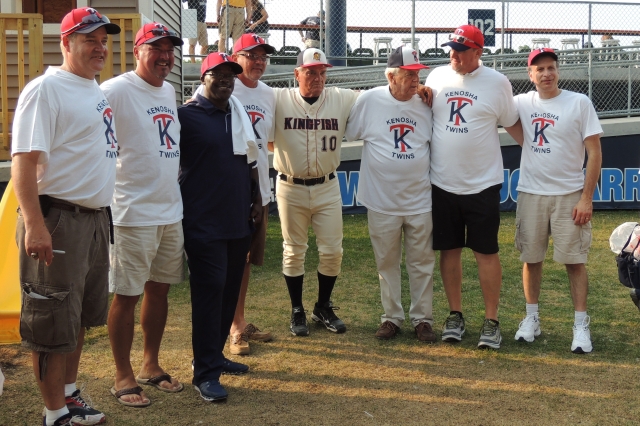 Some Kenosha Twins alumni get together for photos during their reunion Friday at Simmons Field. (Photo by Craig Wieczorkiewicz/The Midwest League Traveler)