Posted on April 7, 2012 by Craig Wieczorkiewicz

On my way home from Appleton yesterday, I stopped in Beloit to take in my first Snappers game of the year and watch top Twins prospect Miguel Sano in action.

Sano did not disappoint, launching a long grand slam with two outs in the bottom of the 7th inning. When he hit the ball, there was no doubt it was leaving the park.

Here is a photo of Sano at the hot corner early in the game:

Beloit Snappers 3B Miguel Sano in the field

The grand slam was Sano’s first hit of the season. He went 1-for-4 with two strikeouts in the game.

The Snappers beat the Peoria Chiefs 6-1. Beloit’s other runs came on an RBI double by LF J.D. Williams and a bases-loaded balk by Chiefs RP Luis Liria.

Peoria’s lone run came on an RBI double by DH Eduardo Gonzalez. Chiefs SP Patrick “P.J.” Francescon pitched well, striking out nine batters (including six in a row) while giving up only two hits and one run in 4.2 IP. He also hit two batters.

Regardless, there are some really neat things about the Pohlman Field experience that aren’t found at many other places in the minors anymore. For instance, players have to use the concourse to get from the clubhouse to the dugout, which is a big plus for autograph seekers. Players also sometimes are seen ordering food from the same concession stands that fans use, and they have to use the same restrooms, too – even during games. Beloit is the only place where I’ve stood next to a relief pitcher relieving himself in the restroom before he entered the game in relief.

Another fun thing about Pohlman Field is the lack of ballpark behind the outfield wall. Ballhawks can hang out behind the park to snag batting-practice home run balls, or you can just stand at the top of the bleacher seats outside the ballpark’s first-base side and watch players take their swings, stretch and throw.

Since the weather was beautiful before the game started, I did both of those things. I watched some BP from the top of the bleachers and then stood behind the centerfield wall for awhile. I got a couple cool BP balls that clearly are hand-me-downs from the Minnesota Twins (Beloit’s parent club): one commemorating the final season of baseball at the Metrodome and one commemorating Target Field’s inaugural season. 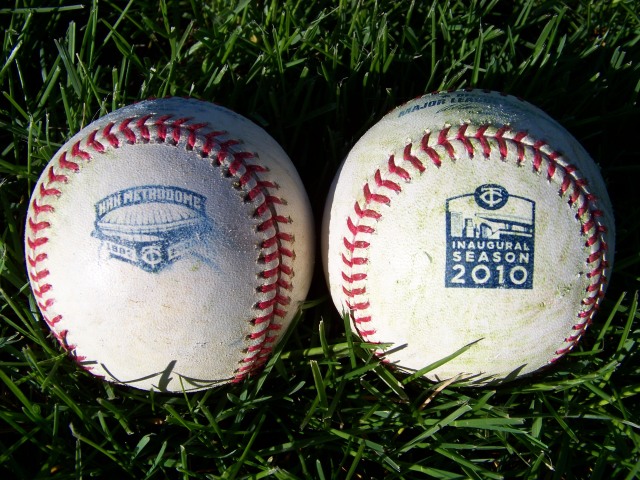 Sometimes commemorative baseballs like these get demoted to the minors for use in batting practice.