Posted on March 28, 2020 by Craig Wieczorkiewicz

Noah Syndergaard pitched for the Lansing Lugnuts in 2011 and 2012. (Photo by Craig Wieczorkiewicz/The Midwest League Traveler)

Kenny Rogers in the Midwest League

Posted on March 21, 2020 by Craig Wieczorkiewicz

Country music legend Kenny Rogers died Friday at age 81. Upon seeing the news, I automatically thought of former baseball player Kenny Rogers, who pitched in the major leagues for 20 seasons.

Before making his MLB debut for the Texas Rangers in 1989, Rogers’ journey through the minor leagues included two seasons in the Midwest League. He pitched for the Burlington Rangers in 1984 and 1985, mostly as a reliever.

Rogers returned to the Midwest League late in his career when he made a rehab start for the West Michigan Whitecaps. He gave up three runs (one earned) and seven hits, struck out four and walked two in five innings, and was hung with the loss in that 2007 game vs. the Dayton Dragons.

Posted on December 2, 2019 by Craig Wieczorkiewicz

In the Midwest League, Moose split time between third base and shortstop. At the plate he batted .272 with 22 HR and 71 RBI in 126 games with the Bees during the 2008 regular season. Burlington won the Midwest League championship that year.

Moustakas is a nephew of former Texas Rangers first baseman Tom Robson, who managed the Midwest League’s Wausau Timbers in 1979.

Turner to return as Snappers manager for 2020 season

Posted on November 5, 2019 by Craig Wieczorkiewicz 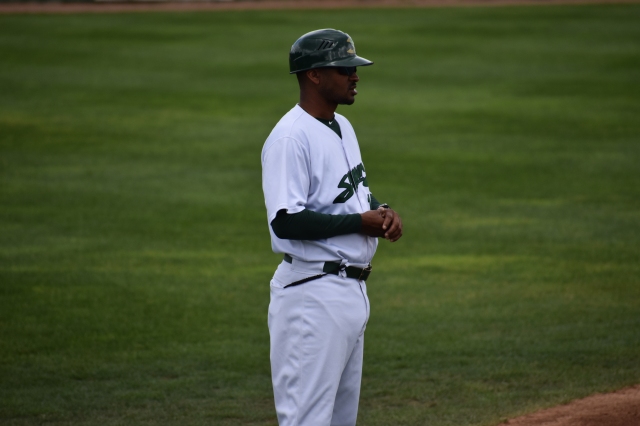 Lloyd Turner will return for a second season as manager of the Beloit Snappers next year. (Photo by Craig Wieczorkiewicz/The Midwest League Traveler)

Lloyd Turner will return for a second season as manager of the Beloit Snappers, the Oakland Athletics announced Tuesday.

Turner was a rookie manager in 2019, when he led the Snappers to a 54-84 overall record. He has coached in the A’s farm system since 2013, including two seasons as Beloit’s hitting coach (2014 and 2015). His 11-year professional playing career included six seasons in the A’s organization and five years in the independent Atlantic League. He played four games in the Midwest League, going 4-for-12 at the plate for the 2003 Kane County Cougars.

Returning with Turner is pitching coach Don Schultze. During his 14 years as a pitching coach in the A’s organization, Schultze served in that capacity for the Snappers in 2016, 2018 and 2019, and for the Cougars in 2008.

Beloit’s new hitting coach is Javier Godard, who played in the A’s organization from 2013 to 2018. Last year was his first as a coach.

Posted on September 15, 2019 by Craig Wieczorkiewicz 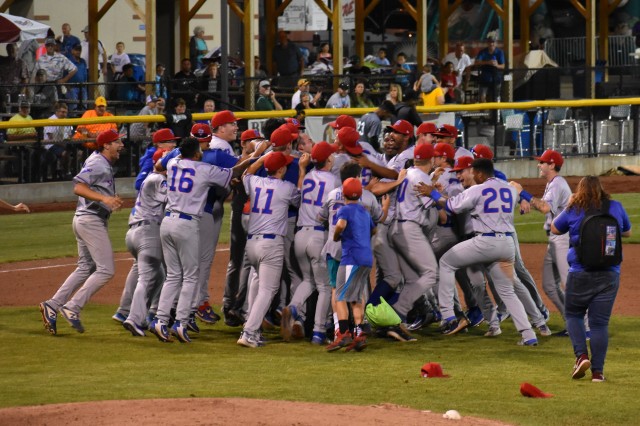 The South Bend Cubs beat the Clinton LumberKings 5-0 in Game 3 of the Midwest League Championship Series to win the franchise’s first MWL title since 2005.

The Cubs went undefeated through all three rounds of the playoffs, and finished with perhaps their strongest game of the postseason thanks to a combination of big hits and dominant pitching.

Four South Bend pitchers — led by starter Riley Thompson — combined to two-hit Clinton without giving up a run or a walk. Thompson struck out 10 in five innings, and allowed only one baserunner — Christopher Torres, who reached base on a throwing error by Thompson; the pitcher later picked off Torres to end the inning.

Both LumberKings hits came off Cubs pitcher Fauris Guerrero, who struck out three in his two innings of work. The first hit was an infield single by Davis Bradshaw, on a tough play for shortstop Andy Weber, with two outs in the bottom of the 6th inning. The other hit was a two-out single by Kameron Misner in the bottom of the 7th. 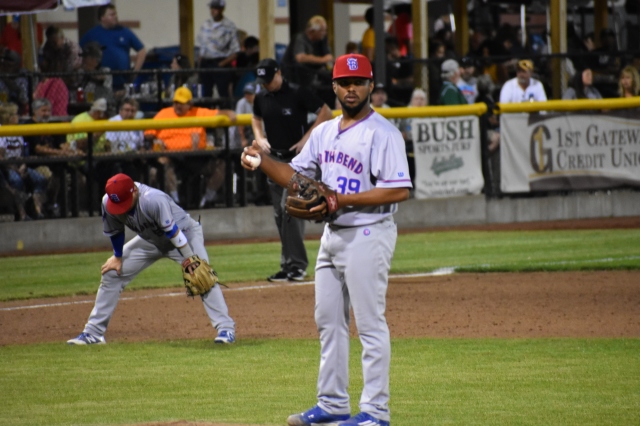 South Bend Cubs pitcher Fauris Guerrero palms the ball as he looks over at the runner on first base.

Kameron Misner fouls back a pitch during Saturday’s game. He was one of two Clinton players to hit safely in the game.

Eugenio Palma and Brian Glowicki each pitched a hitless inning of relief for the Cubs.

Offensively, South Bend got two-run homers from Levi Jordan (in the 2nd) and Andy Weber (in the 5th). Weber also drove in SB’s 5th run when his ground ball took a bad hop past first baseman Evan Edwards, allowing Jordan to score.

Levi Jordan homered on this swing in the 2nd inning.

Andy Weber heads back to the dugout after striking out in the top of the 1st. He made up for it later with a two-run homer and an RBI single.

LumberKings starting pitcher Josh Roberson gave up four runs on five hits and two walks while striking out six in five innings. Before Saturday’s game, he hadn’t given up an earned run since August 16.

This MWL title is South Bend’s fourth, after the team previously was crowned league champions in 1989, 1993 and 2005. They were a Chicago White Sox affiliate for their first two titles, and an Arizona Diamondbacks farm team for the third one.

Many of the players on the current South Bend team were members of last year’s Northwest League champion Eugene Emeralds. (Eugene is a step below South Bend in the Cubs farm system.) Like South Bend this year, the Emeralds went undefeated in their postseason run last year.

Before the current team, the last Cubs affiliate to win a Midwest League title was the 2014 Kane County Cougars. This was Clinton’s first season as a Miami Marlins affiliate; interestingly, the last Marlins team that won a MWL championship was also a Cougars team, in 2001.