Posted on September 2, 2019 by Craig Wieczorkiewicz

Seth Gray was one of four Kernels batters who collected an RBI in Cedar Rapids’ 5-1 win in Beloit on Sunday.

A four-run 3rd inning propelled the Cedar Rapids Kernels to a 5-1 win over the Beloit Snappers on Sunday.

Gabe Snyder drove in the first of four Cedar Rapids runs in the 3rd inning of Sunday’s game.

Kernels starting pitcher Kody Funderburk earned his first win of the season. He allowed one run on five hits and two walks. He struck out eight and threw a wild pitch. 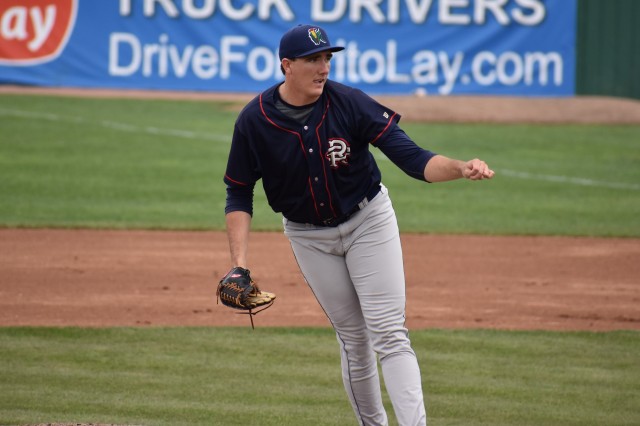 Rickey Ramirez pitched the final three innings for the Kernels, scattering two hits and two walks while striking out one in his scoreless outing. He earned his fifth save.

On a personal note, Sunday’s game at Pohlman Field was a family affair for me. I usually go to Midwest League games alone so I can concentrate on shooting photos, tweeting updates, and other stuff. This time I was accompanied by my family; it was my daughter’s first game at the Beloit ballpark. She had fun, and particularly enjoyed meeting Snappy (the home team’s mascot) and running the bases after the game.

If you follow me on Twitter, you may have already seen the following photo of me and my daughter in the stands. But I want to share it with pride here, too.

I look forward to bringing her to more Midwest League games in the future!

The Kane County Cougars beat the Burlington Bees 3-2 in 10 innings, and the Peoria Chiefs beat the Clinton LumberKings 2-1. That gives the Cougars a one-game lead over the LumberKings heading into the final day of the regular season.

Both teams already punched their tickets to the postseason, but the Western Division second-half title — and homefield advantage in the first round of the playoffs — is up for grabs.

The LumberKings won the season series between the two teams, beating the Cougars in nine of their 17 games.