Posted on July 1, 2019 by Craig Wieczorkiewicz 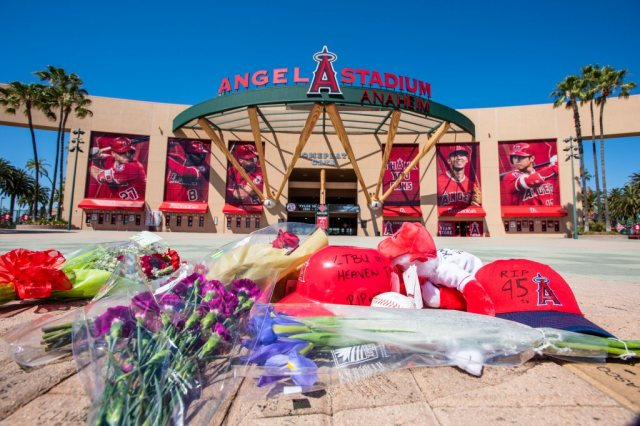 Fans made a makeshift memorial to Tyler Skaggs outside Angel Stadium after hearing of the pitcher’s death Monday. (Photo by Leonard Ortiz/Orange County Register)

Skaggs, a former pitcher for the Cedar Rapids Kernels and the South Bend Silver Hawks, was 27. While a cause of death hasn’t been released yet, a police spokesperson told reporters that neither foul play nor suicide are suspected.

Skaggs was drafted 40th overall by the Angels in 2009, and made his professional debut that year. He spent his first full pro season (2010) in the Midwest League, mostly with the Kernels, but finishing with the Silver Hawks after the Angels traded him to the Arizona Diamondbacks as part of a deal to acquire pitcher Dan Haren. (The trade took place on July 25, but Skaggs technically wasn’t included in it until August 7 because of a then-rule preventing players from being traded before the one-year anniversary of when they signed their first contract. It was known he would be included in the deal once that date was reached, so he sat on the Kernels bench for about two weeks waiting for the transaction to be completed.)

Skaggs was roommates with Mike Trout when they both played for Cedar Rapids. (Read about that here.) Trout, now arguably the best player in baseball, won the Midwest League MVP and Prospect of the Year awards that season.

Skaggs was sent back to the Angels as part of a three-team trade in December 2013. He pitched in parts of seven seasons for the Angels and the Diamondbacks.