Posted on June 4, 2019 by Craig Wieczorkiewicz 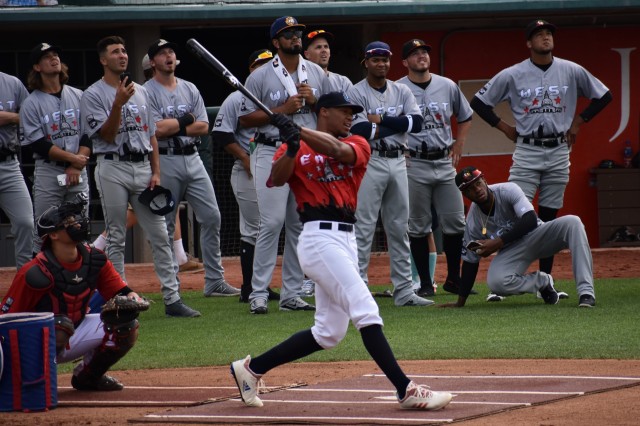 Lake County Captains OF Will Benson swings during last year’s MWL Home Run Derby. Will he be asked to participate in this year’s event? (Photo by Craig Wieczorkiewicz/The Midwest League Traveler)

Lake County Captains outfielder Will Benson and Quad Cities River Bandits RHP Luis Garcia respectively were named the Midwest League’s offensive player and pitcher of the week for May 27-June 2.

This is the third time Benson won the award this season. He earned it this time by batting .409 (9-for-22) with four homers, a double, eight runs batted in, seven runs scored, five walks and four stolen bases in seven games. Overall this season, the Cleveland Indians prospect is batting .278 with 16 HR, 45 RBI and 18 SB in 50 games with the Captains.

Garcia made one start last week, scattering one hit and three walks across six innings vs. the Burlington Bees. He struck out 10 and earned the win in QC’s 1-0 shutout at Community Field. Overall this season, the Houston Astros farmhand is 4-0 with a 2.93 ERA, 60 strikeouts, 16 walks and one save in 43 innings (nine games/six starts) for the River Bandits.

Mississippi River flooding prompted the Midwest League to relocate the June 4-6 series between the River Bandits and the Chiefs from Davenport, Iowa, to Peoria, Ill.

Flooding has been an ongoing issue for the River Bandits this year. Modern Woodmen Park itself has not been flooded, but the area around it was earlier this season and is again now. After the upcoming series is finished, the Quad Cities team will have played 46 of its first 56 games on the road (and had another three games cancelled when the Los Angeles Dodgers, parent club of the Great Lakes Loons, did not agree to a series move to nearby Augustana College).

Modern Woodmen Park is surrounded by floodwater from the Mississippi River. (Photo by Kaylee Golden)