Posted on May 7, 2019 by Craig Wieczorkiewicz 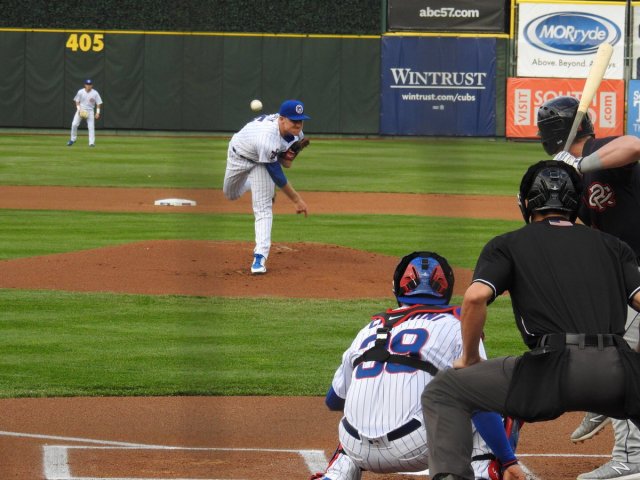 South Bend Cubs right-handers Derek Casey and Peyton Remy combined to pitch a nine-inning no-hitter against the Cedar Rapids Kernels at Four Winds Field on Monday. It was the eighth no-hitter thrown by the South Bend franchise, which joined the Midwest League in 1988.

Casey pitched seven perfect innings before he was lifted for Remy at the start of the 8th inning. The first batter Remy faced reached on an error, and another runner reached on a throwing error with two outs in the 9th inning. Remy also walked a batter, but did not give up a hit.

South Bend’s offense managed only three hits and two walks, but the Cubs needed only Tyler Durna’s two-run homer in the 5th inning to win 2-0.

Two different backstops caught for South Bend. Rehabbing Chicago Cubs catcher Victor Caratini caught the first four innings before Rafelin Lorenzo took over for the rest of the game. Caratini, coming back from a fractured left hamate bone that required surgery, went 1-for-2 with a double.

This was the second Midwest League no-hitter of the season. The Kane County Cougars no-hit the Quad Cities River Bandits at Peoria’s Dozer Park — yes, you read that right — on April 19. You can read about Kane County’s no-hitter here.