Posted on June 8, 2018 by Craig Wieczorkiewicz 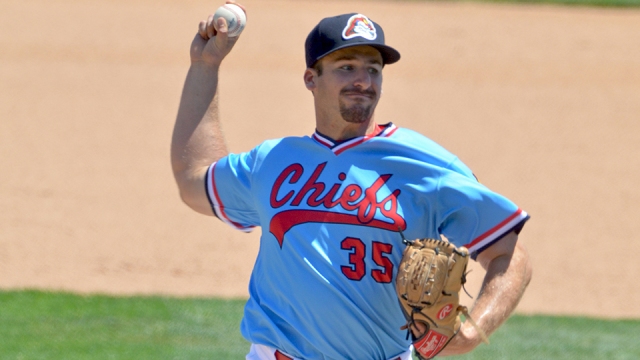 The Chiefs won the Thursday night game 8-0, with four of their runs driven in by Nick Plummer. Angel Moreno drove in three other runs, including two on a 9th-inning homer.

Balestrieri allowed only one baserunner, who reached on a two-base error in the bottom of the 1st inning. He retired the next 25 batters, striking out six of them.

It is the 10th no-hitter for the Peoria franchise, and the first since a three-pitcher no-no on July 23, 2015. (The 2015 no-hitter was started by rehabbing St. Louis Cardinals pitcher Jaime Garcia.) The team’s last solo no-hitter was pitched by Austin Kirk on July 4, 2011, in front of a packed house that included me watching from the outfield lawn. (Read my post about the game here.)

The no-hitter is the fifth pitched in the Midwest League this season.

(In case you’re wondering, I’ve seen only one other no-hitter in person, despite the high volume of games I’ve attended over the years. I saw my second no-no in Beloit last season; the Snappers pitched it against the eventual Midwest League champion Quad Cities River Bandits. You can read my post about that game here.)