Posted on April 25, 2018 by Craig Wieczorkiewicz 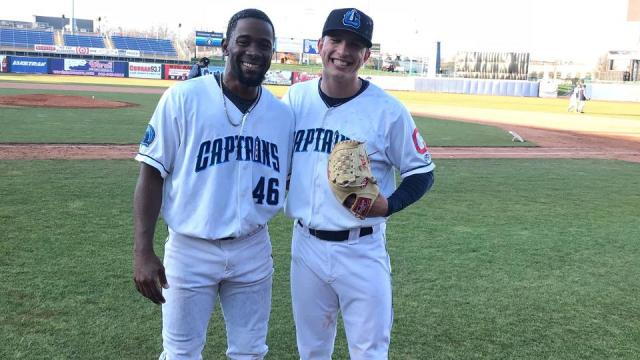 The Lake County Captains no-hit the West Michigan Whitecaps in the opening game of their Wednesday doubleheader, then mounted a come-from-behind victory in the second game to sweep the Classic Park twinbill.

Francisco Perez and James Karinchak combined efforts to no-hit the Whitecaps, with Perez pitching all but the last two outs of the seven-inning contest. In his 6.1 innings, Perez struck out four and walked six; after getting the first out in the 7th, he walked the next three batters, prompting his removal from the game. Karinchak struck out the first batter he faced and got the next one to fly out for the final out of the game.

It was the Captains’ first no-hitter since April 11, 2011, when Trey Haley, Francisco Jimenez and Clayton Ehlert combined to no-hit the Dayton Dragons.

Will Benson homered twice, Jonathan Laureano homered once, and Austen Wade drove in a run during Wednesday’s no-hitter, which the Captains won 4-0.

The Captains won the second game 6-3 after the Whitecaps had an early 3-0 lead in the 1st inning. Wade and Nolan Jones homered, Jorma Rodriguez had three hits and a run batted in, and Jose Vicente doubled twice for the Captains. Brady Policelli drove in two runs for the Whitecaps. Captains reliever Domingo Jimenez got the win, his third of the season; he struck out six and walked three, but didn’t give up a hit in 3.1 scoreless innings.