Mother Nature causes weekend of postponements – and a series relocation

Posted on April 15, 2018 by Craig Wieczorkiewicz 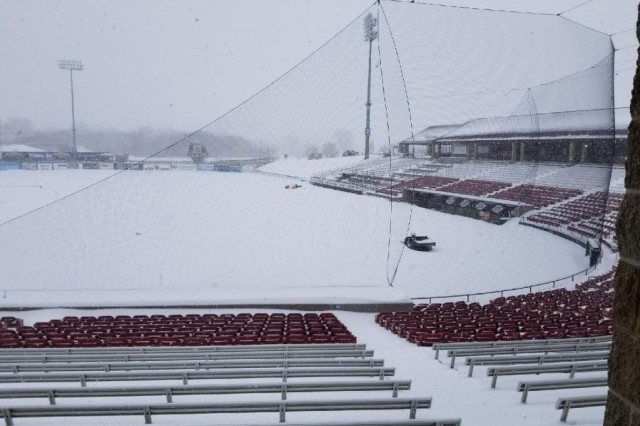 It’s been a rough start to the Midwest League season, weather-wise, and this past weekend was a prime example of that. Inclement weather caused most scheduled games to be postponed, and a heavy snowstorm prompted relocation of an upcoming series.

All eight MWL games scheduled for Saturday were postponed, and only four teams were able to play Sunday. The Peoria Chiefs swept their doubleheader with the Wisconsin Timber Rattlers, and the Bowling Green Hot Rods won both games of their twinbill with the Fort Wayne TinCaps.

Meanwhile, a severe storm with blizzard conditions dumped over 20 inches of snow on the Appleton area, burying Fox Cities Stadium and making it unsafe for the Timber Rattlers to return home after they finished playing Sunday. This prompted the team to move their upcoming Tuesday-Thursday series with the Kane County Cougars to Peoria’s Dozer Park. The Timber Rattlers are scheduled to play another series in Peoria next weekend, so they will stay in the Illinois city through next Sunday.

“This is a tough situation for everyone in the area and it would have been impossible to play any games at Neuroscience Group Field this week,” Timber Rattlers president Rob Zerjav said in a press release. “You have to get creative when one of the worst snowstorms in the history of Wisconsin hammers you before the start of a homestand. This was the best option.

“We want to thank Peoria general manager Jason Mott and his staff for being open to hosting these games,” Zerjav added. “It is incredible to be part of a league where teams step up to help out in situations like this.”