Posted on April 5, 2018 by Craig Wieczorkiewicz 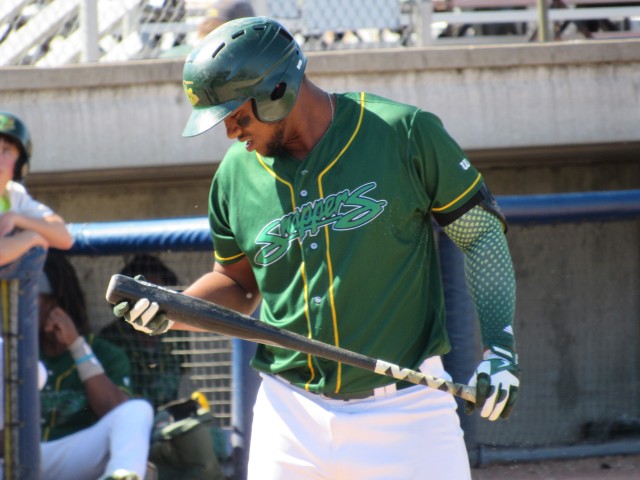 Miguel Mercedes is one of eight 2017 Beloit Snappers returning to the team for the start of the 2018 season. (Photo by Craig Wieczorkiewicz/The Midwest League Traveler)

Those prospects are outfielder Austin Beck (ranked No. 6 by Baseball America and MLB Pipeline), shortstop Nick Allen (No. 14 by MLBP, No. 15 by BA), RHP Wyatt Marks (No. 26 by MLBP) and RHP Dakota Chalmers (No. 30 by BA).

Beck, the No. 6 overall pick in the 2017 draft, didn’t perform too well at the plate in his pro debut season, batting only .211 with 51 strikeouts in 41 rookie-level games last year (though he did manage to drive in 28 runs despite his low batting average). If he can improve his plate discipline, Baseball America says, the 19-year-old has the ability to be a regular for the A’s in just a few years, as he has above-average raw power, speed and arm.

Allen had a reputation as a slick fielder in high school, and his performance on the diamond during his first pro season didn’t change that assessment. Baseball America says the 19-year-old — who was drafted out of high school in the third round last year — is the best defensive shortstop in the A’s system, with a plus arm and plus speed. However, he isn’t projected to ever be more than a light hitter at the plate. Last season he batted .254 with six extra-base hits and 14 RBI in 35 rookie-level games.

Marks, a 22-year-old drafted in the 13th round last year, looked good in his pro debut (mostly in the short-season New York-Penn League). He went 3-0 with a 2.36 ERA, 56 strikeouts and 14 walks in 42 innings (13 games/seven starts). He’ll look to build upon that success as he moves up to a more challenging league for a player his age this year.

Chalmers, a 21-year-old third-rounder from the 2015 draft, returns to Beloit after spending the first two months of last season with the Snappers. (He went 2-2 with a 4.34 ERA, 47 strikeouts and 29 walks in 29 innings (10 games/five starts) in the Midwest League.) Baseball America says the key to success for Chalmers is better control, which the A’s worked on with him during instructional league.

You can see the complete Snappers roster here.

Longtime A’s minor-league coach Webster Garrison is managing the Snappers this year. He was the Midwest League Manager of the Year in 2003, when he led the Kane County Cougars to a MWL-best 80-59 record in the regular season. You can read more about him and his coaching staff here.

Like what you read here? Consider making a minimal monthly pledge of at least $1 to get early access to my team previews, along with other perks of being a patron of my work covering the Midwest League, here. (Donors were able to read this particular post two days early on my Patreon site.) It is completely voluntary to do so, and is not necessary in order to keep reading my work on this website.