Posted on January 6, 2018 by Craig Wieczorkiewicz 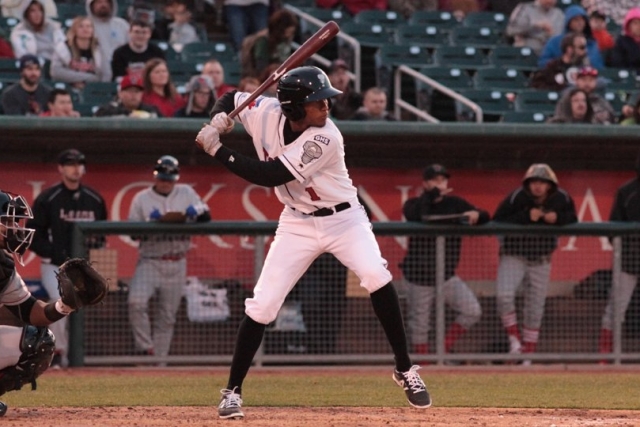 Minor-league outfielder Edward Olivares played 101 games with the Lansing Lugnuts in 2017. He was traded to the San Diego Padres on Saturday. (Photo by Tyler Marcotte/Lansing Lugnuts)

The San Diego Padres traded infielder Yangervis Solarte to the Toronto Blue Jays on Saturday, getting in return two players who suited up for the Lansing Lugnuts last season.

Solarte also is a former Midwest Leaguer, having played 41 games with the 2008 Beloit Snappers. He batted .218 with 17 RBI and seven stolen bases. The Venezuela native made his major-league debut for the New York Yankees in April 2014, and was traded to San Diego six months later. He played 128 games with the Padres last season, batting .255 with 18 HR and 64 RBI.

In exchange for Solarte, the Padres received prospects Edward Olivares and Jared Carkuff. Both of the former Blue Jays farmhands played in the Midwest League last season.

Olivares, a speedy outfielder, spent most of the 2017 season with the Lugnuts. He batted .277 with 17 homers, nine triples, 26 doubles, 65 runs batted in, and 18 stolen bases in 101 MWL games. He drew 22 walks and struck out 82 times. He hit for the cycle against the South Bend Cubs on April 24 and was named the Midwest League offensive player of the week for the period of July 3-9.

Olivares finished last season in the High-A Florida State League, where he batted .221 with seven RBI in 19 games with the Dunedin Blue Jays.