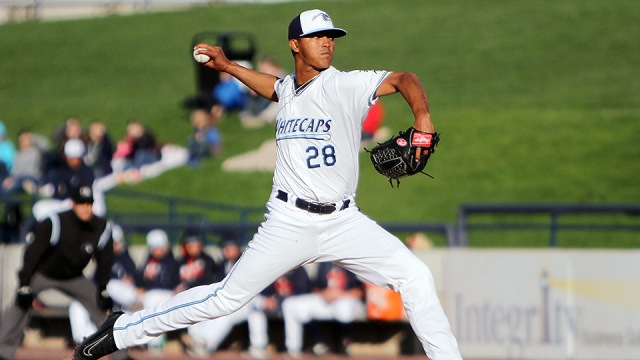 RHP Alfred Gutierrez is the Midwest League pitcher of the week. (Photo by Emily Jones/MiLB.com)

Both Midwest League players of the week for May 8-14 are West Michigan Whitecaps.

Right-hander Alfred Gutierrez was named the MWL pitcher of the week after dominating the Peoria Chiefs last Wednesday. He earned the win after giving up only one hit and walking none while striking out six batters in six scoreless innings. He is 3-1 with a 3.29 ERA, one save, 30 strikeouts and one walk in 27.1 innings pitched (seven games/four starts) for the Whitecaps this season.

Outfielder Cam Gibson was named the MWL offensive player of the week after batting .385 (10-for-26) with three homers, a triple, eight runs batted in, eight runs scored, and two stolen bases in his last six games. His week was capped by a 3-for-5 performance including two homers and five RBI against the Burlington Bees on Saturday. In 34 games this season, he is batting .274 with five homers, six triples, three doubles, seven stolen bases, and 14 runs batted in.