Posted on April 21, 2017 by Craig Wieczorkiewicz 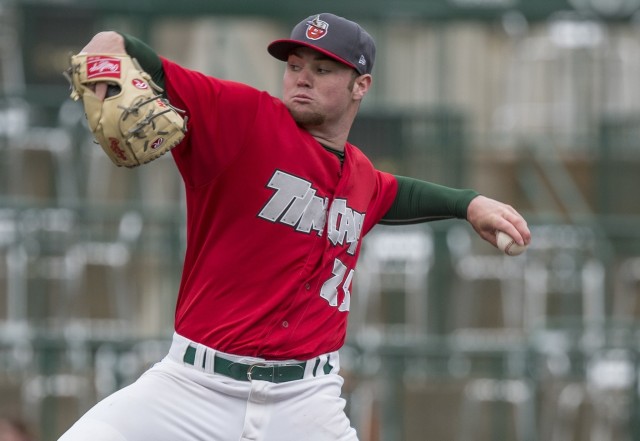 In his third start for the TinCaps this season, Allen held the Great Lakes Loons hitless during his five innings of work. He walked three, struck out seven, and lowered his ERA to 2.08. (In their previous game, the Loons were held hitless for six innings by South Bend Cubs RHP Dylan Cease, which you can read about here.)

Allen entered the season ranked No. 19 among San Diego Padres prospects, according to Baseball America. The 19-year-old hurler spent most of last season with the TinCaps, posting a 3.33 ERA with 47 strikeouts and 22 walks in 54 innings (15 games/11 starts).

The TinCaps won Thursday’s game 7-5 in 11 innings. Cody Thomas hit his third homer of the season for Fort Wayne.

Butler’s dominant outing came at the tail end of Beloit’s game against Burlington, who won 3-1. Butler pitched the last four innings for the Snappers, keeping the Bees hitless while walking two and striking out five. He also hit a batter.

In Cedar Rapids, Kernels RHP Tyler Wells got a no-decision against the Kane County Cougars despite striking out 11 batters in seven innings. He gave up two runs on six hits and no walks, and left the game with a 3-2 lead, but reliever Colton Davis blew the save by giving up three runs in the top of the 9th inning.

Through three starts, Wells has a 2.12 ERA with 25 strikeouts and six walks in 17 innings.

Cougars centerfielder Marcus Wilson went 3-for-5 with a solo homer, a double, a stolen base, and three runs batted in. Kernels shortstop Jermaine Palacios went 3-for-4 with a triple and a double.