Jimenez perfect in MLB debut, sent back to Triple-A afterward

Posted on April 13, 2017 by Craig Wieczorkiewicz 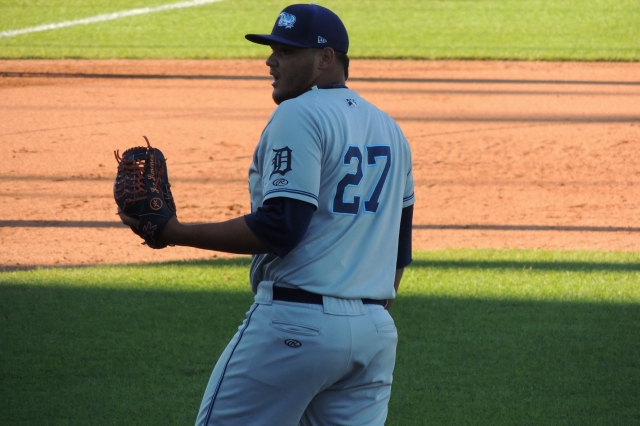 Joe Jimenez posted a 1.47 ERA as the closer for the West Michigan Whitecaps in 2015. (Photo by Craig Wieczorkiewicz/The Midwest League Traveler)

Former West Michigan Whitecaps closer Joe Jimenez made his major-league debut for the Detroit Tigers on Thursday, pitching a 1-2-3 9th inning against the Minnesota Twins. He earned his first big-league strikeout when he got Byron Buxton swinging to end the game.

Jimenez didn’t get to celebrate his successful debut long before he learned he was being sent back down to Triple-A. He was told the news when he entered the clubhouse after the game.

The 22-year-old reliever certainly is expected to return to the major-league level — probably before the end of the season — but the Tigers are taking things slow with their possible closer of the future.

Jimenez pitched for the Whitecaps in 2015, going 5-1 with a 1.47 ERA, 17 saves, 61 strikeouts and 11 walks in 43 innings during the regular season. He was on the mound when the Whitecaps won the Midwest League Championship Series that year.