Posted on March 28, 2017 by Craig Wieczorkiewicz

Former longtime Midwest League president George H. Spelius, who died last September at age 83, will be honored with a sleeve patch on the uniforms of all MWL teams and umpires during the 2017 season.

Spelius served as president of the Midwest League for 28 years, beginning in 1987. He stepped down on Jan. 1, 2015, at which time current MWL president Richard “Dick” Nussbaum II took over. At that time, Nussbaum said the following about Spelius:

George Spelius has left this league in great shape, and I know with the quality of ownership in our league, we will continue to be leaders in providing outstanding service to our fans and the best opportunity for the young stars of tomorrow in their development as players.

A florist by trade, Spelius first became involved with the Midwest League as part of the original group of investors who helped Beloit get a team. The club was known as the Beloit Brewers when it began play in 1982, and changed its nickname to the Snappers in 1995. Spelius was presented with a Lifetime Achievement Award by the Beloit Historical Society’s Elliott-Perring Sports Hall of Fame in 2014.

The Midweast League stabilized and expanded from 12 to 16 teams while Spelius was president. He twice was given the Warren Giles Award for outstanding service as a league president, in 1997 and 2010.

In 2015, Midwest League officials unveiled a newly-designed championship trophy for their league champions. They named it the George Spelius Championship Trophy. 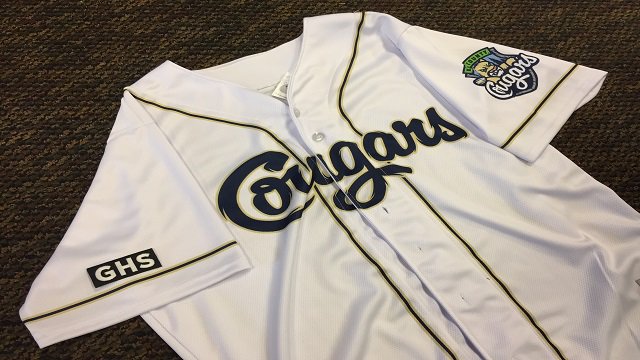 A Kane County Cougars jersey with the “GHS” patch on its right sleeve. (Photo courtesy of the Cougars)