Posted on February 23, 2017 by Craig Wieczorkiewicz

Davis spent the 1978 season with the Cedar Rapids Giants, batting .281 with 16 HR and 73 RBI. Those who remember Davis in the major leagues will recall he was an outfielder and, in the second half of his 19-year career, a designated hitter. When he played in the Midwest League, he was a catcher and an outfielder. He caught 49 games and played 41 games in the outfield for Cedar Rapids.

Davis never caught a game in the major leagues, but he did pitch two innings for the California Angels in 1993, giving up no hits or walks, though he did hit a batter. That was the only time Davis took the field during a game that season, as he was the designated hitter all other times he played.

Davis was inducted into the Cedar Rapids Professional Baseball Hall of Fame in 2015. He also has a star on the Cedar Rapids baseball walk of fame on the concourse at Veterans Memorial Stadium, home of the Kernels, as seen in my photo at the top of this post.

Davis currently is the hitting coach for the Boston Red Sox. 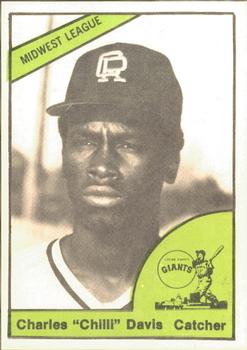 This entry was posted in Cedar Rapids Kernels, Midwest League. Bookmark the permalink.