Posted on September 28, 2016 by Craig Wieczorkiewicz

Former Fort Wayne TinCaps outfielder Hunter Renfroe made quite an impression in the first week of his big-league audition with the San Diego Padres, from being intentionally walked in his first MLB plate appearance to driving in seven runs in Tuesday’s game.

Renfroe is batting .353 (6-for-17) with a double, three homers, eight runs batted in, and four runs scored through his first six MLB games. This comes after he batted .306 with 30 HR, 34 doubles and 105 RBI in 133 games with the Triple-A El Paso Chihuahuas this year, earning him the Pacific Coast League MVP award.

The Mississippi native drove in all seven of San Diego’s runs in the Padres’ 7-1 win over the Los Angeles Dodgers on Tuesday, via a three-run homer and a grand slam. He is the first Padres rookie to plate seven in a single game, and is one of only 10 Padres players ever to drive in that many runs in one game. (The franchise record is eight RBI in one game, set by Nate Colbert in 1972 and matched by Ken Caminiti in 1995.) 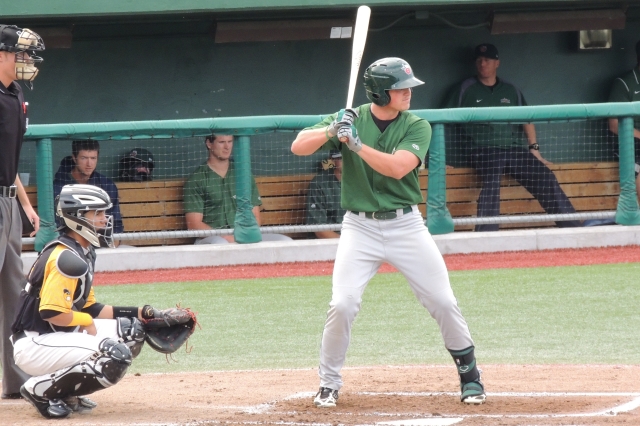 UPDATE: Renfroe had another big game against the Dodgers on Wednesday, going 2-for-4 with 4 RBI. He homered for the third time in two games and is now 8-for-21 with 4 HR and 12 RBI in seven MLB games. His most recent homer was an impressive one, too — it landed on the roof of Petco Park’s Western Metal Building, something that previously had only been done in batting practice and this year’s All-Star Home Run Derby.