Posted on September 21, 2016 by Craig Wieczorkiewicz 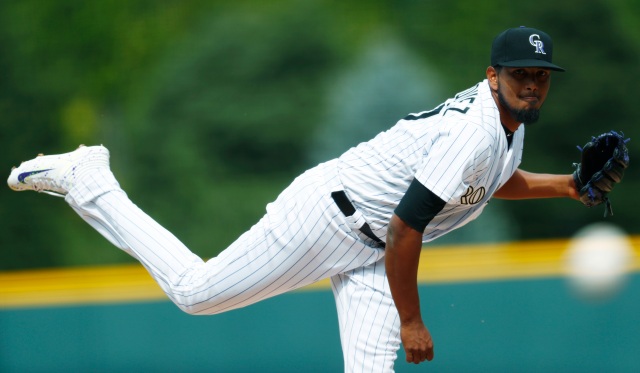 Marquez previously made three relief appearances for the Rockies, making his MLB debut two weeks ago, but Colorado called on him to start its Wednesday matinee against the St. Louis Cardinals. The right-hander pitched well, giving up only one run on four hits and a walk in five innings. He struck out three and hit two batters. The Rockies won the game 11-1.

Former Fort Wayne TinCaps outfielder Hunter Renfroe did something unusual in his MLB debut Wednesday. Pinch-hitting for Travis Jankowski (another former TinCaps outfielder) in the bottom of the 7th inning, Renfroe was intentionally walked by Arizona Diamondbacks reliever Edwin Escobar.

Renfroe is the first player to draw an intentional walk in his first MLB plate appearance since Toronto Blue Jays infielder Luis Lopez did in 2001.

Former Quad Cities River Bandits third baseman Rio Ruiz had an even stranger MLB debut for the Atlanta Braves. He was announced as a pinch-hitter in the bottom of the 7th inning, but never got to bat because a pitching change delayed the game just long enough for a downpour to arrive and halt play. One hour and 50 minutes later, the game was called as a rain-shortened, 6-2 win for the Braves over the Washington Nationals.

Ruiz hasn’t gotten another chance at an at-bat yet as of Thursday.