Posted on September 15, 2016 by Craig Wieczorkiewicz 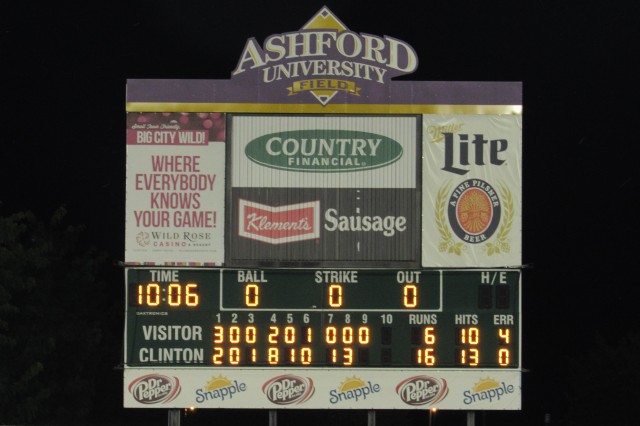 The Clinton LumberKings scored eight runs in the 4th inning on their way to a 16-6 win over the Great Lakes Loons in Game 1 of the Midwest League Championship Series.

Although the LumberKings delivered a rout for their home crowd, the game didn’t always look that way. The Loons scored first with a three-run homer by DJ Peters in the opening frame. Clinton, however, responded with a pair of runs in the bottom half of the 1st, scoring twice on wild pitches by Great Lakes starter Jordan Sheffield.

DJ Peters did his part for the Great Lakes Loons, hitting a three-run homer and a double, and walking twice.

The LumberKings evened the score in the 3rd inning when Luis Liberato doubled home Chris Mariscal. Liberato was one of three Clinton players to collect three hits in the game.

Mariscal also had three hits, including a double and a triple. He walked twice and drove in three runs.

Rayder Ascanio also had three hits for the LumberKings, including a double and a triple. He singled home two runs in Clinton’s eight-run 4th inning. He doubled home two more runs in the 8th inning.

Clinton LumberKings shortstop Rayder Ascanio blows a bubble during a pause in the action.

In addition to Ascanio’s two-run single, the LumberKings delivered a big blow in the 4th on Conner Hale’s three-run double.

The LumberKings scored six of the eight times they came to bat. Loons outfielder Gage Green pitched the bottom of the 8th inning, giving up three runs (two earned) on three hits, a walk and a wild pitch. Loons fielders committed four errors in the game.