Posted on September 8, 2016 by Craig Wieczorkiewicz 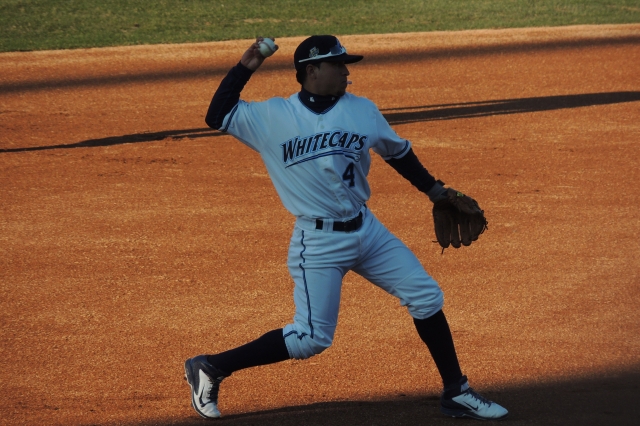 The first round of the Midwest League playoffs began Wednesday with an extra-innings nail-biter, a pair of nine-strikeout performances, a blowout and a rainout.

The first game to start also was the longest one of the night. The West Michigan Whitecaps outlasted the South Bend Cubs, beating them 3-2 in 11 innings at Fifth Third Ballpark. Both teams scored a run in the 2nd inning and then did the same in the 5th inning. Both teams wasted good opportunities to score in the later innings before Jose Zambrano’s walk-off single plated the winning run for the Whitecaps in the final frame.

Whitecaps infielder Will Maddox went 3-for-5 with a run batted in. Cubs starting pitcher Oscar De La Cruz gave up two runs (one earned) on eight hits and no walks while striking out seven batters in six innings. Cubs first baseman Matt Rose, who was named the Midwest League player of the month for August earlier in the day, went 1-for-4 with a walk.

At Ashford University Field, the Clinton LumberKings beat the Peoria Chiefs 4-0 behind a great pitching performance by starter Nick Neidert. The right-hander scattered three hits and a walk while striking out nine batters in seven innings.

LumberKings designated hitter Conner Hale went 3-for-3 with a walk and a stolen base. James Alfonso was the only Clinton hitter who didn’t get a hit, but the catcher drove in two runs.

The Kernels’ bats were popping at Fox Cities Stadium, where Cedar Rapids handily defeated the Wisconsin Timber Rattlers 11-3. Midwest League batting champion Luis Arraez led the Kernels offense by going 3-for-5 with two triples and two RBI. Zander Wiel — the reigning Midwest League offensive player of the week — also went 3-for-5, with a double, a triple and an RBI.

Heavy rain caused the game in Midland, Mich., to be postponed in the bottom of the 4th inning, with the Great Lakes Loons leading the Bowling Green Hot Rods 3-0. Loons righty Yadier Alvarez pitched all four innings for the Loons, scattering five hits and no walks while striking out two.

The game will be resumed at Dow Diamond on Thursday, pushing Game 2 of the best-of-three series to Friday at Bowling Green Ballpark. The playoff schedule will be pushed back a day if a third game is necessary Saturday in Bowling Green. If the Loons or Hot Rods sweep in two games, the second round of the Eastern Division playoffs will begin Saturday as currently scheduled.