Posted on June 1, 2016 by Craig Wieczorkiewicz 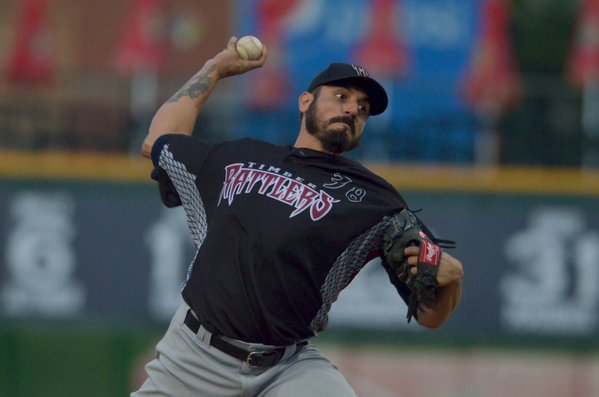 Brewers righty Matt Garza delivers a pitch during his rehab start for the Timber Rattlers on Tuesday. (Photo tweeted by the Peoria Chiefs)

Milwaukee Brewers pitcher Matt Garza began his rehab assignment with the Wisconsin Timber Rattlers on Tuesday, and the Peoria Chiefs didn’t let the major-leaguer get the best of them on their home turf.

Garza pitched two innings, giving up three runs (two earned) on four hits and a wild pitch. He struck out one batter.

Peoria’s starting pitcher, Junior Fernandez, fared much better. He gave up only three hits and two walks while striking out eight batters in six scoreless innings.

The Dozer Park appearance was the first of two scheduled rehab starts for Garza, who will pitch again for the Timber Rattlers at Fox Cities Stadium on Saturday.