Posted on April 24, 2016 by Craig Wieczorkiewicz

The Clinton LumberKings swept the Cedar Rapids Kernels in Saturday’s doubleheader at Ashford University Field, but it took them 25 innings and almost seven hours to do so.

Midwest League doubleheaders are scheduled to last seven innings per game, but the first “half” of Saturday’s double-dip lasted 18 innings. Down to their last out in the top half of the 7th inning, the Kernels evened the score 1-1 on a Jermaine Palacios RBI single. It took 11 more innings before the LumberKings pushed across the winning run on a James Alfonso RBI single. (Alfonso also drove in Clinton’s first run of the game, on a sacrifice fly in the bottom of the 1st inning.)

The second game finished in the scheduled seven innings, as the LumberKings scored once in the 4th and twice in the 5th to beat the Kernels 3-0. Clinton’s starting pitcher, Art Warren (2-0), earned the win by scattering five hits and two walks while striking out three batters in six scoreless innings.

Interestingly, Choi got his first MLB hit off the team that signed him out of South Korea. He was a Mariners farmhand when he played for the LumberKings, batting .298 with 8 HR and 43 RBI in 66 games with the 2012 team. He joined the Angels as a Rule 5 Draft pick in December. 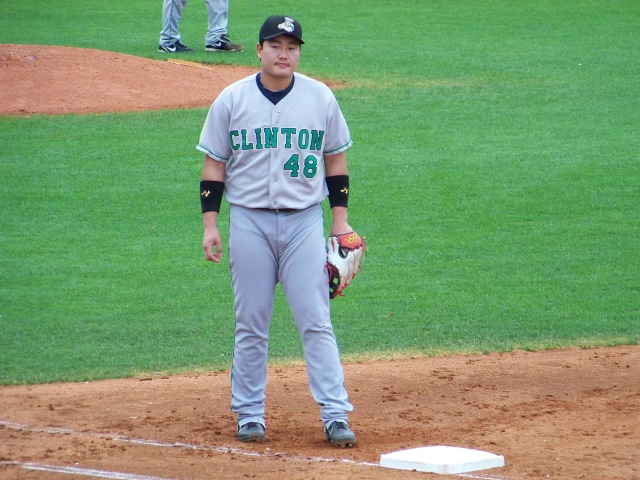