Posted on April 5, 2016 by Craig Wieczorkiewicz

Outfielder Narciso Crook returns to the Dayton Dragons for the start of the 2016 season. (Photo by Craig Wieczorkiewicz/The Midwest League Traveler)

Tyler Stephenson is ranked by Baseball America as the top catching and positional prospect of the Reds, and No. 4 overall in the farm system (behind three pitchers). Cincinnati’s top draft pick last year, he made his professional debut in the rookie-level Pioneer League, batting .268 with 1 HR and 16 RBI in 54 games with the Billings Mustangs. He was considered one of the league’s top prospects.

Here is part of what Baseball America says about Stephenson:

Optimistic projections peg Stephenson for 15-20 home runs eventually, to go with an above-average hit tool. He has a plus arm and the tools to be an average defender if he works on maintaining his agility. He’s big for a catcher [6’4″], but he’s flexible with quiet hands.

If all goes according to plan, someday the Reds may have Stephenson catching their top pitching prospect, Robert Stephenson, at the major-league level. (They are not related. Incidentally, Robert — a former Dragons pitcher — is slated to make his major-league debut Thursday against the Philadelphia Phillies.)

The top pitching prospect assigned to Dayton is RHP Tanner Rainey (No. 17), who went 2-2 with a 4.27 ERA, 57 strikeouts and 28 walks in 59 innings/15 starts for Billings last year. Here is what Baseball America says about him:

Rainey’s stuff seems well-suited to relief because he has 92-96 mph velocity and an above-average slider that could allow him to move quickly as a reliever. But he also has a strong lower half with massive thighs. Rainey’s 6-foot-3, 240-pound frame helped the Reds conclude that they should try him in the rotation, even though his too-firm changeup is in the formative stages, his control is below-average and his stuff faded in the later innings of his initial pro starts at rookie-level Billings. Scouts see Rainey moving back to the bullpen after logging innings as a minor-league starter.

The ranked prospects aren’t the only players to watch on this team. For example, first baseman James Vasquez was named the Arizona League’s MVP last year after batting .359 with 9 HR and 36 RBI in 42 games. It will be interesting to see what he does in his first full-season assignment.

LHP Ty Boyles was named the 2015 Pioneer League Pitcher of the Year after going 4-3 with a 2.17 ERA, 48 strikeouts and 17 walks in 58 innings/10 starts for Billings. His season ended with a thud, pitching poorly in three of his four starts for the Dragons, but now he gets a second chance to take on Midwest League hitting.

Infielder Shedric Long returns to the Dragons after batting .283 with 6 HR and 16 RBI in 42 MWL games last year. That’s the maximum amount of games the 20-year-old has played in a season so far in his career, so it will be interesting to see how he performs over the course of a full season. 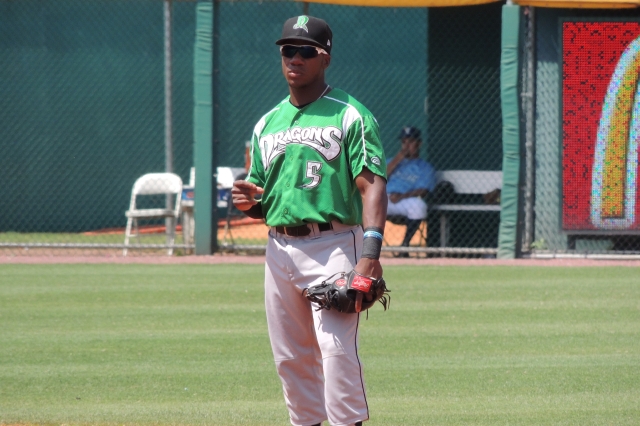 For those who like seeing the sons of former major-leaguers, the Dragons have Brantley Bell (son of Jay Bell) on their roster. The third baseman made his professional debut last season, batting .275 with 34 RBI and 14 SB in 62 games in the Pioneer League.

And if you’re planning a visit to the Dominican Republic, perhaps you can ask DR native Jose Siri for directions and recommendations. Siri, an outfielder, batted .244 with 3 HR, 19 RBI and 11 SB in 46 rookie-level games last year.

You can see the entire Dragons roster here. The roster currently includes 26 players and will be reduced by one before the Midwest League season begins on Thursday.

The Dragons are managed by former major-league shortstop Dick Schofield. You can read about him and his coaching staff here.