Harrison, Gatewood return to Rattlers roster for start of ’16

Posted on April 4, 2016 by Craig Wieczorkiewicz 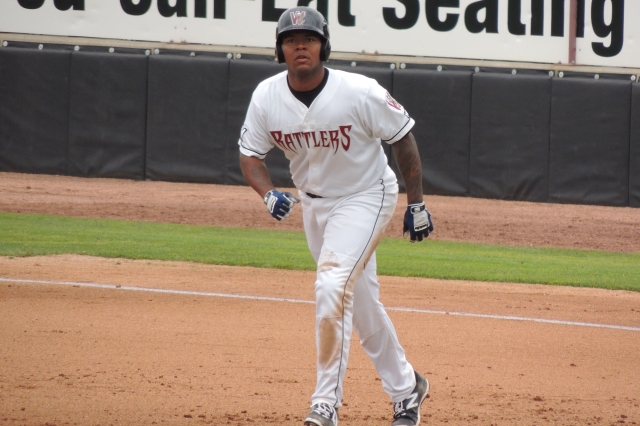 Two of those players — outfielder Monte Harrison (No. 14) and infielder Jake Gatewood (No. 16) — started the 2015 season with the Timber Rattlers as the result of aggressive promotions. Both of them struggled at the plate, sustained significant injuries, and ended their seasons in the rookie-level Pioneer League. They recovered well with the Helena Brewers, and now get a second crack at the Midwest League.

Baseball America said this about Harrison:

When healthy, Harrison is an exciting, athletic player to watch. He can be dynamic on the basepaths, using plus speed and daring to steal bases and go from first to third base in a flash. Harrison has plus bat speed with an advanced approach and plate discipline. His athleticism and speed also plays well in center field, where he chases down flies with ease. But he also has enough arm strength to play right field if his power develops.

BA calls Gatewood “a high-risk/high-reward player” who needs to improve his all-or-nothing approach. He is fine defensively at shortstop, but there is talk of him moving to third base due to organizational needs, so it will be interesting to see how much time he splits between those two positions this year.

Another player to watch on the left side of the diamond is Isan Diaz, who is primarily a shortstop (though he also has played some second base). Last year he batted .360 with 13 HR, 51 RBI and 12 SB in 68 games with the rookie-level Missoula Osprey. Baseball America had him ranked No. 9 among Arizona Diamondbacks prospects before the Brewers acquired him.

Two right-handed pitchers — Marcos Diplan (No. 18) and Miguel Diaz (No. 25) — appear on BA’s Brewers prospects list. Diplan went 2-2 with a 3.75 ERA, 54 strikeouts and 21 walks in 50 IP (13 games/7 starts) for Helena last year. The Brewers are developing him as a starter, though some believe he will be better suited as a reliever in the long run. Diaz posted a 2.21 ERA with 23 strikeouts and five walks in 20 IP (7 games/5 starts) for Milwaukee’s Arizona League team last year. His 2015 season didn’t start until late July after undergoing surgery in March, so it will be interesting to see what he does over the course of a full season.

You can see the entire Timber Rattlers roster here. (Note: There currently are 28 players listed on the roster. Three moves need to be made before the Midwest League season starts Thursday, to meet the 25-man limit.)

Wisconsin’s skipper is Matt Erickson, who has managed the team since 2011. You can read about him and his coaching staff here.

1 Response to Harrison, Gatewood return to Rattlers roster for start of ’16