Posted on April 3, 2016 by Craig Wieczorkiewicz 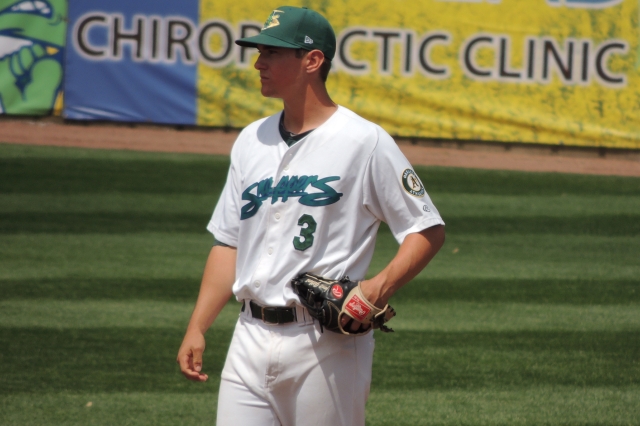 Infielder Trent Gilbert is one of seven players returning to the Beloit Snappers for the start of the 2016 season. (Photo by Craig Wieczorkiewicz/The Midwest League Traveler)

The highest-ranked prospect — and a strong candidate for this year’s Moniker Madness contest — is centerfielder Skye Bolt (No. 23). Drafted by the A’s in the fourth round last year, he batted .238 with 4 HR and 19 RBI in 52 games with the short-season Vermont Lake Monsters. Here is part of what Baseball America said about him in its Prospect Handbook:

Bolt has the makings of a plus defender in center field because he gets good reads and has the pure speed to run down balls in the gaps. He can make highlight-reel catches and has a strong arm as well. Whether his offense comes along is the question. He has solid plate discipline — he walked more than he struck out during his three years in college — and some pull-side power from both sides of the plate.

The other ranked prospect on the Snappers roster is right-hander Dustin Driver (No. 28), who made four starts for Beloit last year. Here is what Baseball America said about his pitching:

Driver’s stuff is undeniable. He works in the mid-90s with his fastball and can reach 99 mph. His secondary pitches need more development, but he can spin a tight slider and get some sink on his changeup. He just has to learn how and when to use them.

The Snappers are managed by Fran Riordan, who took the reins of the team last season. You can read about him and his coaching staff here.