Posted on September 9, 2015 by Craig Wieczorkiewicz 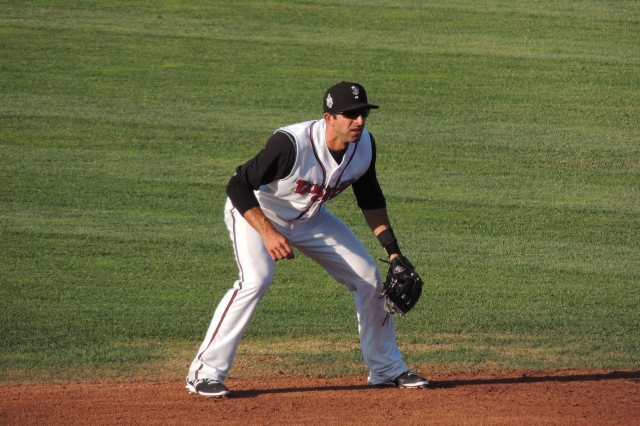 Jason Leblebijian had three hits and drove in a run for the Lansing Lugnuts in their 6-5 win over the Great Lakes Loons. (Photo by Craig Wieczorkiewicz/The Midwest League Traveler)

Three of the four home teams won on the opening night of the Midwest League playoffs.

The Peoria Chiefs beat the Kane County Cougars 2-1 in walk-off fashion at Dozer Park. Peoria’s Brian O’Keefe led off the bottom of the 9th inning with a double and was replaced with pinch-runner Derek Gibson. Kane County reliever Ryan Burr balked Gibson to third base and intentionally walked Nick Thompson and Steve Bean to load the bases before unintentionally walking Kenny Peoples-Walls to score the winning run.

The Lansing Lugnuts were the only away team to win Wednesday. They beat the Great Lakes Loons 6-5 at Dow Diamond. Winning pitcher Shane Dawson gave up three runs on four hits and two walks while striking out eight in six innings.

Lansing’s Jason Leblebijian went 3-for-5 with a run batted in. Mike Ahmed and Garrett Kennedy each hit a solo homer for Great Lakes.

The Cedar Rapids Kernels beat the Quad Cities River Bandits 5-2 at Veterans Memorial Stadium. Winning pitcher Felix Jorge gave up two runs on nine hits and a walk while striking out seven in 7.1 innings. Nick Gordon went 3-for-3 with a double and a run batted in for the Kernels. 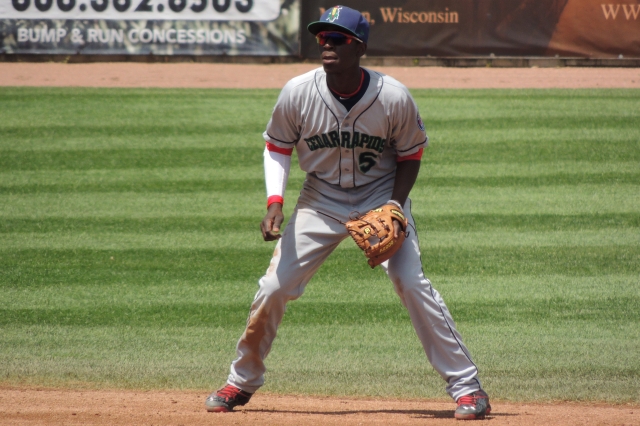 Nick Gordon went 3-for-3 with a double and a RBI for the Cedar Rapids Kernels in their 5-2 win over the Quad Cities River Bandits. (Photo by Craig Wieczorkiewicz/The Midwest League Traveler)