Posted on September 4, 2015 by Craig Wieczorkiewicz 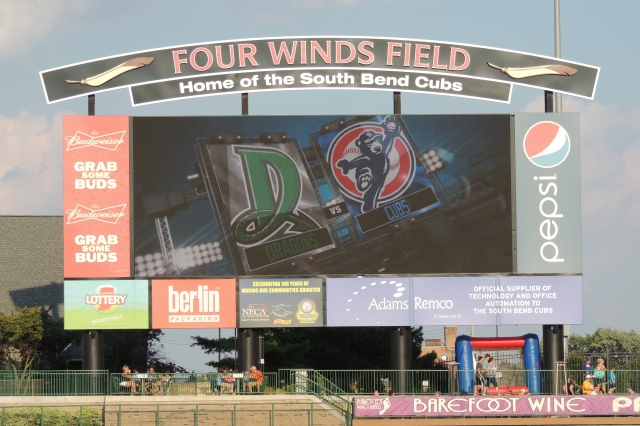 A seven-run 1st inning was enough for the South Bend Cubs to down the Dayton Dragons at Four Winds Field on Thursday.

The home team plated runs in each of the first three innings and their last two frames on their way to winning 12-5. But it was the visiting team that scored first, knocking in a pair of runs on Paul Kronenfeld’s 1st-inning homer.

Dayton Dragons 1B Paul Kronenfeld connects for a home run in the top of the 1st inning.

The Cubs sent 12 batters to the plate in the bottom of the 1st inning, and sent Dragons starting pitcher Ty Boyles to the showers before the frame was finished. Boyles gave up seven earned runs on five hits and three walks. He didn’t strike out anyone, nor did he throw any of Dayton’s six wild pitches in the game.

Despite what the sign behind him says, Dayton Dragons LHP Ty Boyles did not pitch well Thursday. 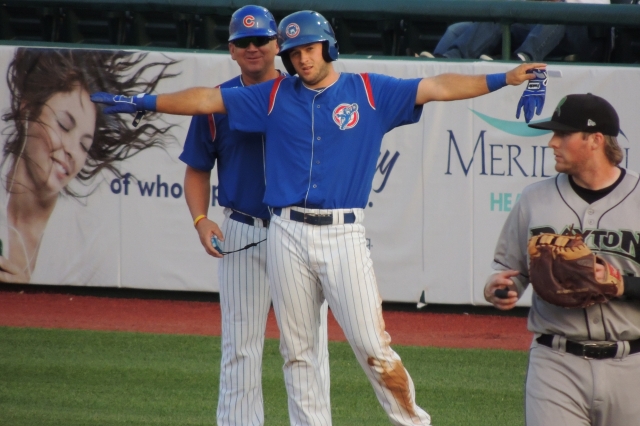 The Cubs gave plenty of offensive support to starter Jake Stinnett, who got the win despite giving up five runs on five hits and a walk in 6.2 innings. He struck out seven and hit two batters.

It was Stinnett’s final start of the season. He finished with a 7-6 record, a 4.46 ERA, 91 strikeouts and 50 walks in 117 innings (22 starts) for South Bend. In his seven starts before Thursday, he struck out 40 and issued only seven walks.

Luis Gonzalez drove in the fifth and final run of the game for Dayton, and suffered what appeared to be a serious injury when sliding into second base. He had to be carried off the field and transported to a local hospital, where it was determined he suffered a dislocated ankle.