Posted on September 3, 2015 by Craig Wieczorkiewicz

Toronto Blue Jays fans flocked to Cooley Law School Stadium to watch pitcher Marcus Stroman’s rehab start for the Lansing Lugnuts on Wednesday. Anyone who stayed for the 9th inning also got to see an impressive comeback by the Great Lakes Loons, who rallied for seven runs in their final frame to win 7-4.

It was Stroman’s first outing since tearing the ACL in his left knee during a spring training drill in March. He looked sharp, striking out seven, walking one, and allowing no hits in 4.2 innings. Only two batters reached base — one on the walk, and another on an error.

The original plan was to limit Stroman to about 55 pitches, but the 24-year-old right-hander came back out to start the 5th inning despite already throwing 61 pitches. He finished with 69.

Lugnuts reliever Conor Fisk took over for Stroman and carried the no-hitter into the 7th inning before Julian Leon’s leadoff single broke it up. Brian Wolfe added a single and Mike Ahmed walked, but Fisk got out of the bases-loaded jam by getting Jimmy Allen to fly out. 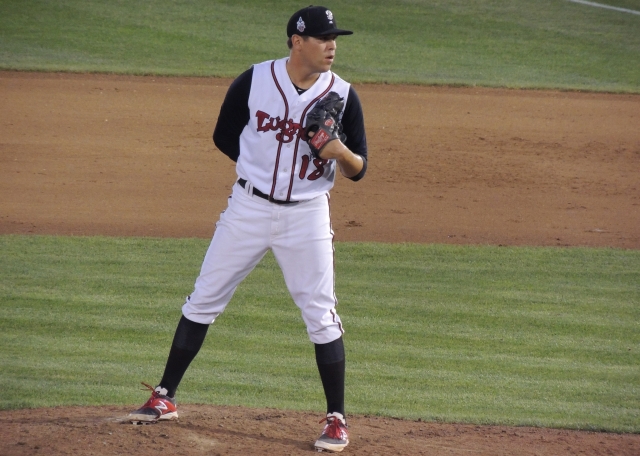 Loons starter Grant Holmes was perfect in his first three innings, but didn’t fare well in his fourth and final one. After walking the leadoff hitter, he gave up a two-run homer to Richard Urena. He walked the next batter, who was doubled home by Ryan McBroom.

The Lugnuts added a run in the bottom of the 7th inning, on a Chris Carlson RBI single that scored David Harris.

Lansing Lugnuts LF Chris Carlson heads back to the dugout after grounding out in the bottom of the 1st inning.

It seemed like that would be enough for a Lugnuts victory, considering the Loons managed only two hits through eight innings. But the Great Lakes bats woke up in the top of the 9th with Lugnuts closer Carlos Ramirez on the mound. Ramirez walked the leadoff batter, retired the next two hitters, and walked the fourth man he faced.

Then the scoring began.

The Loons plated seven runs, all with two outs. They took a 6-4 lead on a three-run homer by Justin Chigbogu.

Loons 1B Justin Chigbogu looks at the bat that would later help him become the hero of the game for Great Lakes.

Leon followed Chigbogu’s homer with his second single, knocking Ramirez out of the game. Dusty Isaacs took the mound and gave up an RBI triple to Matt Beaty before striking out Nick Sell to end the inning.

The Lugnuts attempted to rally, but stranded two runners on base without scoring in the bottom of the 9th.

Lansing and Great Lakes have two games left in this series before facing each other in the first round of the Midwest League playoffs next week.