Posted on September 2, 2015 by Craig Wieczorkiewicz 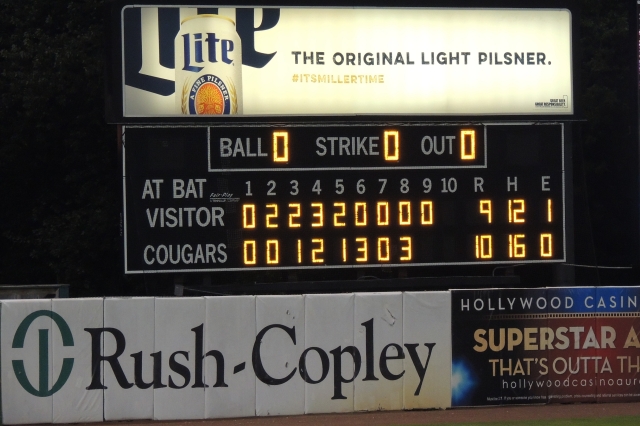 On Fan Appreciation Night at Fifth Third Bank Ballpark, the Kane County Cougars gave their home crowd something extra-exciting to cheer about.

Not only did the Cougars win Tuesday, they did it in comeback fashion after trailing the Beloit Snappers by six runs at two different points in the game. The Cougars clawed their way back into the game, culminating with a three-run 8th inning that gave them their first lead of the night, a 10-9 advantage that held despite a uncharacteristically bumpy 9th for closer Zac Curtis.

When the Cougars scored three runs in the 6th, suddenly it looked like they might complete the comeback. Victor Reyes singled home a run, and Cody Regis doubled home two more in that frame.

Snappers reliever Cody Stull struck out the side in the 7th, but the Cougars got to him in the 8th. Three runs were charged to Stull, who was removed from the game after he gave up a game-tying, two-run triple to Colin Bray. 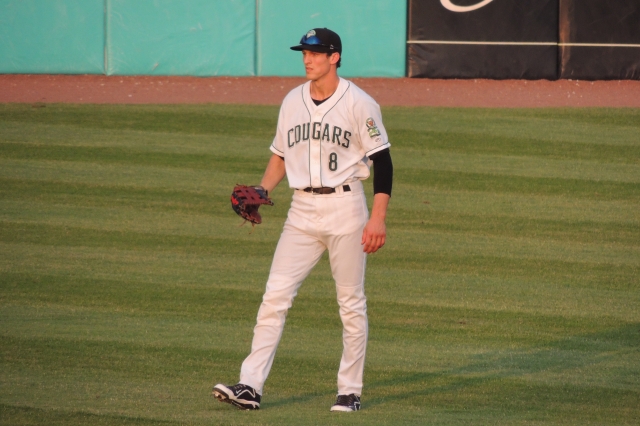 Koby Gauna replaced Stull and promptly gave up a Marty Herum sacrifice fly that brought Bray in to score what turned out to be the winning run.

Cougars closer Zac Curtis came in for the save, which he converted successfully, but not without some drama. Beloit’s first two batters reached base — Jose Brizuela was hit by a pitch, and Max Kuhn drew a walk — giving the Snappers two on with no outs. Curtis rebounded by striking out the next three batters, earning him his Midwest League-leading 32nd save of the season.

Beloit Snappers RF Shawn Duinkerk went 3-for-4 with a double and 3 RBI.

With the win, Kane County’s magic number to clinch the second-half Western Division title is now three. The Cougars and the Peoria Chiefs are battling for the division title, but both teams have clinched playoff berths already.