Posted on August 31, 2015 by Craig Wieczorkiewicz

Peoria Chiefs outfielder Harrison Bader raises his glove to show the ball after a diving catch during a game at Dozer Park last month. (Photo by Ron Johnson/Journal Star)

In seven games during that period, Bader batted .448 (13-for-29) with two home runs, six runs batted in, and six runs scored. On Wednesday he went 4-for-4 with two triples and three RBI against the Cedar Rapids Kernels. He followed that performance with a three-hit game against the River Bandits on Thursday.

Deetz made one start last week, holding the Clinton LumberKings hitless in seven innings. He struck out nine and walked two.

Stroman to rehab in Lansing

Toronto Blue Jays RHP Marcus Stroman is scheduled to make a rehab start for the Lansing Lugnuts on Wednesday and will be limited to 55 pitches in the appearance, according to media reports.

Stroman has missed the entire 2015 season to this point after tearing the ACL in his left knee during a drill in spring training. Last year was his rookie season, in which he went 11-6 with a 3.65 ERA, 111 strikeouts and 28 walks in 130.2 innings for the Blue Jays.

Chicago Cubs prospect Javier Baez is batting .444 during his 16-game hitting streak after collecting four singles on Sunday. He is batting .324 with 13 HR, 61 RBI and 17 SB in 70 games with the Iowa Cubs this season. He is expected to be among Chicago’s September call-ups when MLB rosters expand Tuesday. 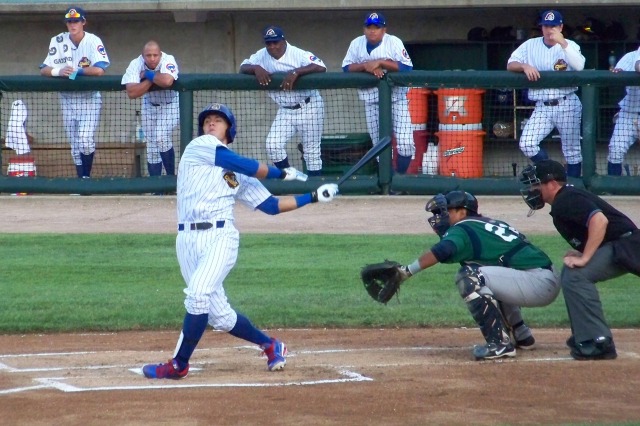 Javier Baez swings at a pitch while playing for the Peoria Chiefs. (Photo by Craig Wieczorkiewicz/The Midwest League Traveler)

Houston Astros prospect J.D. Davis homered twice and drove in six runs Sunday, bringing his total to 26 HR and 100 RBI in 114 games with the High-A Lancaster JetHawks this season. He was named the California League’s offensive player of the week for August 24-30.

Twins rookies Miguel Sano and Byron Buxton visited the Minnesota State Fair on Saturday. Normally I wouldn’t write about something like this, but team photographer Brace Hemmelgarn was there with them to capture it all on film. (Well, probably not on film, but you know what I mean.)

Both players were named Midwest League prospect of the year during their respective seasons in the league. Buxton also received the MWL MVP award.