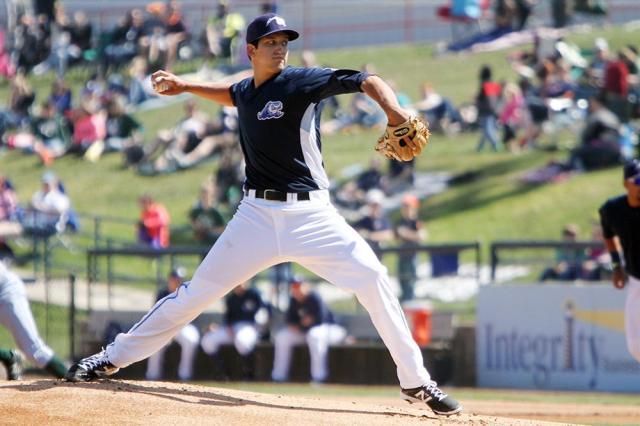 West Michigan Whitecaps RHP A.J. Ladwig and Lansing Lugnuts 1B/DH Rowdy Tellez respectively were named the Midwest League pitcher and offensive player of the week for the period of May 11-17.

Ladwig’s only start during that period came on May 14 against the Bowling Green Hot Rods. He struck out 10 while allowing only four hits and a walk in eight scoreless innings. In six starts this season, he is 3-3 with a 4.63 ERA, 30 strikeouts and five walks in 35 innings.

MWL All-Star Game to be televised

Can’t make it to the Midwest League All-Star Game this year? You’re in luck if you get the American Sports Network.

Minor League Baseball and Sinclair Networks Group announced that 15 MiLB games will be broadcast on ASN this summer, including the MWL All-Star Game on Tuesday, June 23. The game will be played at Dozer Park, home of the Peoria Chiefs.

You can see the entire slate of MiLB games scheduled to be broadcast on ASN here.

Urias to have cosmetic eye surgery

Former Great Lakes Loons LHP Julio Urias, the Los Angeles Dodgers’ top pitching prospect, will be sidelined for a month after he undergoes cosmetic surgery on his left eye late next week. Here’s the gist of the story from MiLB.com’s Jake Seiner:

MLB.com’s No. 8 prospect will undergo the procedure — periorbital benign mass removal — on May 28. He’s expected to resume baseball activities in June and be back to game action before July. …

Urias has had three prior operations on his left eye to address a benign mass. Urias told the Los Angeles Times this spring that he can see through the eye, though it appears nearly closed at all times.

“That’s how god works,” Urias told the Times. “He gave me a bad left eye but a good left arm.”

The 18-year-old has emerged as one of baseball’s most promising pitching prospects and has dominated as the youngest player in the Double-A Texas League this year. In seven starts with Tulsa, Urias is 1-2 with a 3.00 ERA. He’s struck out 46 batters and walked just nine over 36 innings.