Posted on July 28, 2014 by Craig Wieczorkiewicz 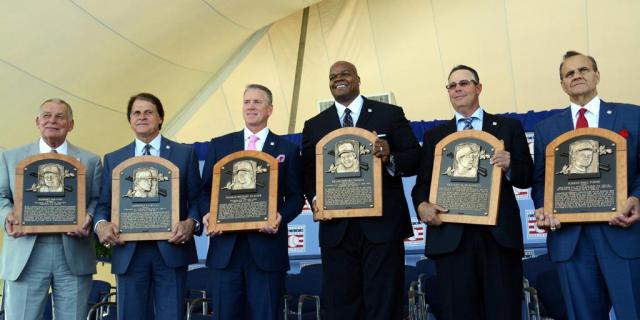 Greg Maddux became the seventh former Midwest Leaguer to be inducted into the Baseball Hall of Fame as a player when he and five other baseball greats received their HOF plaques during Sunday’s ceremony in Cooperstown.

Maddux didn’t specifically mention Peoria in his acceptance speech, but the 355-game winner did thank three minor-league coaches, including Jim Wright, who was his Chiefs pitching coach. Maddux said Wright “helped me locate my fastball to both sides of the plate.”

The other five men inducted into the Baseball Hall of Fame on Sunday were former players Tom Glavine and Frank Thomas and former managers Bobby Cox, Tony La Russa and Joe Torre.

As is tradition, there is an area in the Baseball Hall of Fame set aside for artifacts from new HOF inductees. Maddux’s display case includes two jerseys and a cap he wore during notable games in his career, his second of four Cy Young Awards, his second of 18 Gold Glove Awards, a baseball, an autographed ticket stub, the shoes he wore during the 1995 World Series, and a baseball glove.

A look at early scouting reports on Greg Maddux

Maddux elected to Hall of Fame with 97.2% of vote

This entry was posted in Baseball Hall of Fame, Midwest League, Peoria Chiefs. Bookmark the permalink.