Posted on July 5, 2014 by Craig Wieczorkiewicz

The scene at Modern Woodmen Park on Saturday afternoon.

A few hours of sometimes-intense rainfall Saturday afternoon resulted in the Quad Cities River Bandits-Wisconsin Timber Rattlers game being postponed. The game will be played as part of a doubleheader Sunday.

Anyway, my trip to Davenport wasn’t a total wash because I got the chance to shoot some photos of the Mississippi River flooding around Modern Woodmen Park.

Two things to note in the following photo: the temporary bridge used by people to gain access to the ballpark, and the completely flooded parking area beneath the Centennial Bridge. 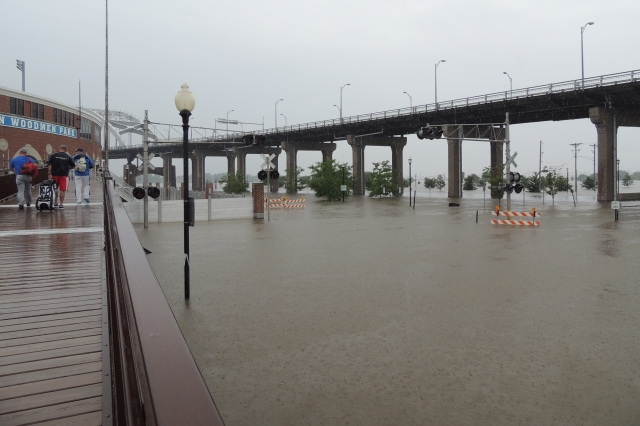 The next shot is looking down from the temporary bridge. Most of the flooded area normally is a parking lot, but in the middle of the photo there also are unseen railroad tracks between the fence and the flood wall.

The next photo looks at Modern Woodmen Park from the other side of the flooded parking lot seen in the previous picture. I shot it while standing on the sidewalk along the south side of River Drive, the closest I could get to the park without getting wet or using the temporary access bridge.

Here’s a look at the Ferris wheel behind Modern Woodmen Park, along with the back of the ballpark’s scoreboard:

Finally, this photo captured a sight that made me laugh: