Posted on September 14, 2013 by Craig Wieczorkiewicz

The Quad Cities River Bandits got a big-game performance from SP Josh Hader as they beat the South Bend Silver Hawks 4-2 Saturday to become the 2013 Midwest League champions.

The River Bandits swept the Midwest League Championship Series just as they did in 2011, and now they have two MWL titles in three years. They’re affiliated with a different MLB team now — they were a Cardinals farm team in 2011 and are an Astros one now — but the results are the same.

Hader, who was acquired by the Astros about six weeks ago, came up big for the River Bandits. He gave up only three hits and a walk while striking out eight batters in seven innings.

The offensive highlights of the game for the River Bandits were a solo homer by Rio Ruiz and a 3-for-4 performance by Tony Kemp. 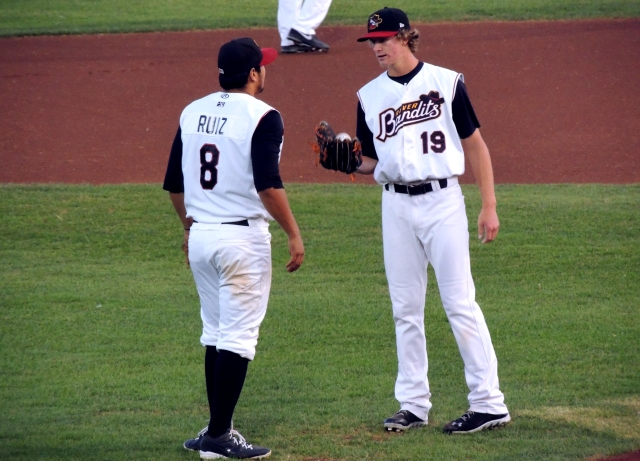 Rio Ruiz (left) and Josh Hader were two of the Game 3 heroes for the River Bandits.

The Silver Hawks’ offense looked sluggish all night, though Rudy Flores slammed a long-distance homer to right to score two runs for South Bend in the top of the 9th inning.

Also worth noting: The River Bandits drew an impressive crowd of 3,607. I’m sure there were many factors, including great weather and several dollar deals, but the team nonetheless deserves credit for one of the best-attended games in this Midwest League postseason.