Posted on March 16, 2013 by Craig Wieczorkiewicz 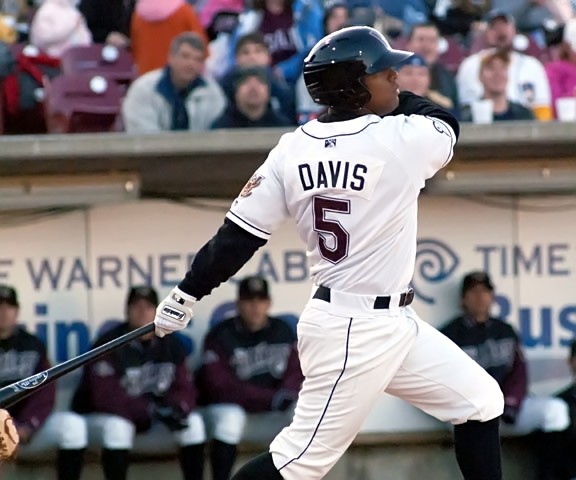 Khris Davis connects with a pitch as a member of the 2010 Wisconsin Timber Rattlers. (Photo by Patrick S. Blood/PSB Foto)

Milwaukee Brewers OF prospect Khris Davis, who played for the Wisconsin Timber Rattlers in 2010, hit a pair of home runs against the Cincinnati Reds today.

Officially, Davis has hit five homers this spring, but that doesn’t count one he hit in an exhibition game against Team Canada. He is batting .364.

Davis wasn’t expected to make the team out of spring training this year, but he may have played his way onto the squad, the Milwaukee Journal Sentinel‘s Tom Haudricourt reported.

After the game, manager Ron Roenicke said the club’s decision makers are thinking about keeping Davis as a hitter on the bench. Davis is considered a leftfielder only because of defensive inadequacies, so if he is kept it would be primarily as a right-handed pinch-hitter.

“He’s put us in a position where we’re talking about him, and how he fits on the bench, what we can do with our last two or three spots,” said Roenicke. “If you need a right-handed hitter, right now he might be the best hitter we have.”

Roenicke acknowledged that it’s usually not easy for young players to come out of the minors and adjust to the irregular playing time of a bench player. But that’s how impressive the 25-year-old Davis has been.

Davis set the single-season record for home runs for the Timber Rattlers when he hit 22 in 2010. He won the Midwest League Home Run Derby that year.