Posted on December 19, 2012 by Craig Wieczorkiewicz

Baseball Hall of Fame pitcher Richard “Goose” Gossage, who made his mark in the Midwest League with a stellar 1971 season, will receive the 2013 Red Smith Award in Appleton next month.

According to The Post-Crescent, the Red Smith Award is given annually to an individual who has contributed or continues to contribute to sports either on or off the field in Wisconsin. The award will be presented to Gossage at the 48th Annual Red Smith Sports Award Banquet on Jan. 15 at the Radisson Paper Valley Hotel in downtown Appleton.

Gossage was the Midwest League Player of the Year in 1971 when he went 18-2 with a 1.83 ERA and 149 strikeouts in 187 IP for the Appleton Foxes. He threw 15 complete games that season, including seven shutouts.

The Wisconsin Timber Rattlers will have the same coaching staff in 2013 as they did in 2012 when they won the Midwest League Championship Series.

The 2013 season will be Matt Erickson’s third as manager of the Timber Rattlers. It will be Dusty Rhodes’ third season as hitting coach and Dave Chavarria’s second as pitching coach.

I think it’s fair to say that throughout most of the Midwest League territory (especially the Western Division), people are preparing for the snowstorm coming from the west. I’m hoping this means I’ll have some new snowbound stadium photos to post in the coming days. In the meantime, here’s one of Fox Cities Stadium that was tweeted by the Timber Rattlers last week: 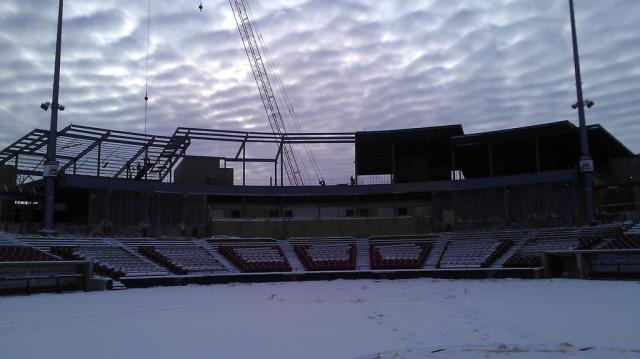