Posted on September 29, 2012 by Craig Wieczorkiewicz 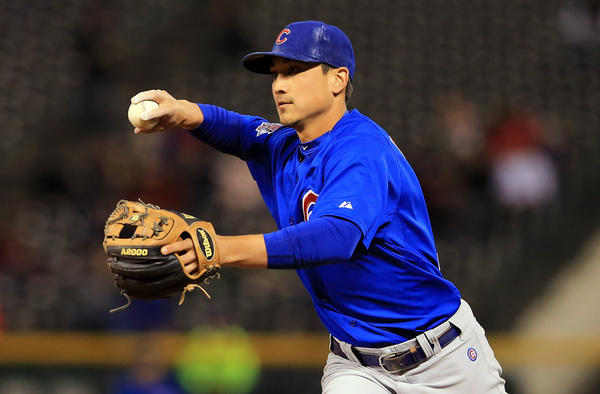 Chicago Cubs 2B Darwin Barney was three outs away from setting a new MLB single-season record for consecutive errorless games at second base. Unfortunately, that’s when he committed only his third error of the season (his second of the year at second base), so he has to settle for a tie with Placido Polanco at 141 games.

Polanco set the American League/MLB record while a member of the Detroit Tigers in 2007. Barney set the National League record earlier this year after surpassing Cubs Hall-of-Famer Ryne Sandberg’s 123-game streak. Interestingly, Sandberg managed Barney when both were with the Peoria Chiefs in 2007.

Equally interesting (at least to me, it is), Polanco also played for the Peoria Chiefs, in 1995 when the team was an affiliate of the St. Louis Cardinals. He appeared in 103 games and played shortstop in 101 of them. (He made one appearance at second base that season.) He committed 21 errors in 421 chances. He batted .266 with 2 HR, 41 RBI and 7 SB.

This entry was posted in Baseball Hall of Fame, Midwest League, Peoria Chiefs. Bookmark the permalink.