Posted on September 16, 2012 by Craig Wieczorkiewicz

The Wisconsin Timber Rattlers pose with the championship flag and trophy they won.

The big hit came off the bat of Nick Ramirez, who batted .310 this postseason. His two-run double in the top of the 7th inning broke a 2-2 tie that had been in effect since the bottom of the 3rd inning.

Wisconsin Timber Rattlers 1B Nick Ramirez swings at a pitch during the 1st inning of Game 4.

The Timber Rattlers also were the first to score, when Brandon Macias and Chadwin Stang hit back-to-back doubles to lead off the game. They added a run in the 2nd on a solo homer by Max Walla.

The TinCaps scored their two runs in the bottom of the 3rd inning, on an RBI double by Yeison Asencio and a sac fly by Travis Whitmore.

Timber Rattlers RP Brent Suter worked a 1-2-3 bottom of the 9th to finish off the TinCaps, ending with back-to-back strikeouts of Whitmore and Lee Orr. 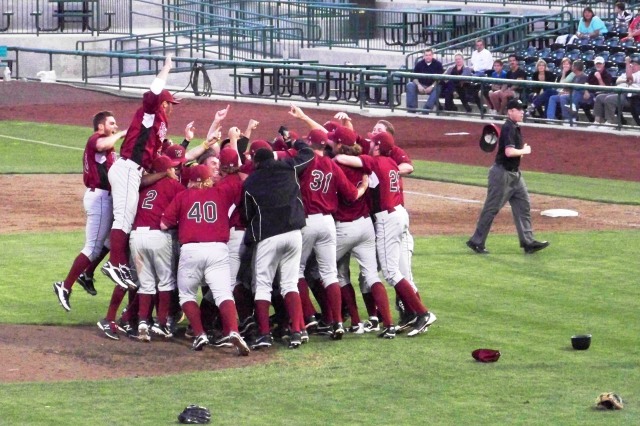 This is the first Midwest League title for the Wisconsin Timber Rattlers. The franchise, however, won eight titles as the Appleton Foxes, in 1964, 1966, 1967, 1969, 1978, 1982, 1983 and 1984. The Foxes were rebranded as the Timber Rattlers in 1995, coinciding with the opening of Fox Cities Stadium. The Appleton ballpark will be renovated during the offseason.