Posted on September 13, 2012 by Craig Wieczorkiewicz

The start of Game 2 of the Midwest League Championship Series was delayed by rain for an hour, but once it got under way, Fort Wayne TinCaps SP Colin Rea was more than ready to go.

The TinCaps tied the series 1-1 with a 5-1 win over the Wisconsin Timber Rattlers, thanks largely to Rea’s dominant outing. He gave up only one run on two hits and two walks, and struck out three batters. The run was a solo homer by Nick Ramirez.

Wisconsin Timber Rattlers 1B Nick Ramirez homers in the 4th inning of Game 2.

In relief of Rea, RHPs Johnny Barbato and Matt Stites each pitched a perfect inning.

Fort Wayne’s scoring was bookmarked with home runs by Lee Orr in the 2nd inning and Duanel Jones in the 9th inning. Tyler Stubblefield (double) and Jace Peterson (sac fly) drove in runs in the 5th inning. 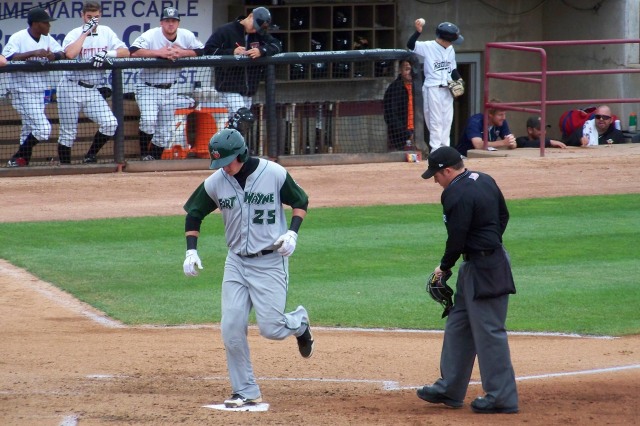 Fort Wayne TinCaps 1B Lee Orr steps on home plate after homering in the 2nd inning of Game 2.