Posted on July 17, 2012 by Craig Wieczorkiewicz

I went to my first Northwoods League game Saturday, at Warner Park (aka “The Duck Pond”) in Madison, Wisconsin. I wanted to go to a summer collegiate league game sometime this year and chose this one because the Madison Mallards were hosting “Madison Muskies Turn Back the Clock Night” in honor of their Midwest League predecessors, the Madison Muskies (1982-1993).

Some fans received Madison Muskies mesh hats and players wore Madison Muskies uniforms, which remind me of the Oakland A’s, with whom the Muskies were affiliated for all 12 years of their existence.

The game was notable for the Mallards in that their 2 millionth fan to enter the ballpark was the 137th person to walk through the gates Saturday. The lucky fan, J.J. Streicher-Bremer of Madison, won a lot of cool stuff that you can read about here.

The Mallards draw very well for being a summer collegiate team, with an average game attendance of about 6,000 fans. That’s the best mark among summer collegiate leagues throughout the country and also is much better than what the Muskies ever drew during their time at Warner Park.

During the game, I spoke with Tyler Isham, the head of public relations for the Mallards. He said a recent survey indicated that the biggest draw for fans is the family-friendly atmosphere. Indeed, there is plenty of room for children to run around there, and there is a stretch of walkway designed specifically to keep their interest.

Personally, I found that the number of people there made it harder than usual for me to check out all the nooks and crannies of the ballpark. People were constantly walking throughout the park, giving the place the buzz and feel of a festival with baseball as a backdrop. I’ll have to go back sometime to see what I may have missed this time — perhaps next week for the Northwoods League All-Star Game. (“The Baseball Project,” a band that includes Mike Mills of REM fame, will perform a pregame concert at the ballpark.)

What I do know is this: the ballpark is more impressive than I thought it would be as a home for summer collegiate baseball. It has a “new” feel to it — probably because much of the place was renovated in recent years — and has an impressive selection of food and drinks, including local beers for those of legal drinking age. 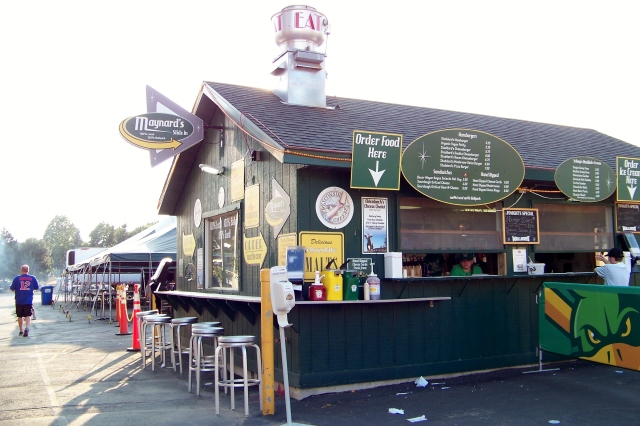 Maynard’s Slide-In is one of several main areas where fans can buy food inside The Duck Pond.

I also was impressed by the team store, which was built with over 95 percent materials recycled from parts of the ballpark that were replaced or renovated. For example, half of the original aluminum bleacher seats from the stadium became siding for the store, and the roof consists of steel panels from the previous canopy structure.

They have a good selection of reasonably-priced merchandise, including this T-shirt that I bought:

As for the game itself, the Madison Mallards beat the Wisconsin Rapids Rafters 13-5. Mallards SP Justin Topa (a sophomore at Long Island University) looked great on the mound, giving up just one hit and two walks while striking out three batters during his five innings of work. The Mallards led 12-0 when he left the game.

Mallards 1B Jeff Zimmerman (a sophomore at Northern Illinois University) and Mallards C Taylor Gushue (a freshman at University of Florida) each had 3 hits and 4 RBI. Rafters RF Sean Godfrey (a sophomore at Ball State University) had two hits, including a 3-run homer in the top of the 7th inning. 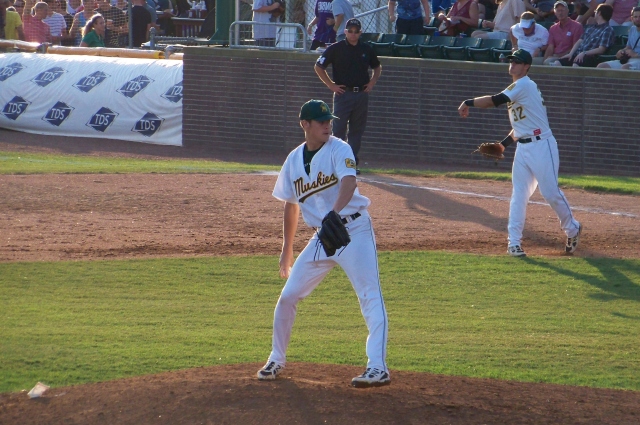 RHP Justin Topa and 1B Jeff Zimmerman of the Madison Mallards

1 Response to Madison Muskies Turn Back the Clock Night