Posted on March 2, 2012 by Craig Wieczorkiewicz 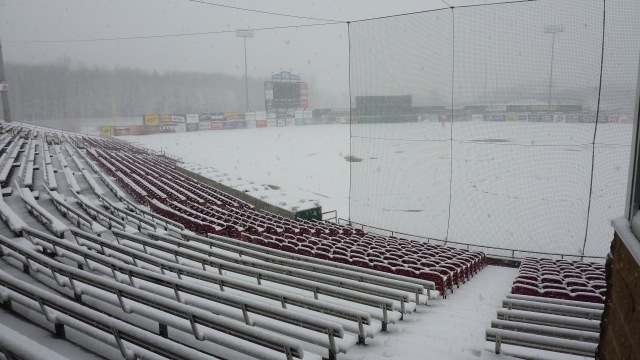 With spring training games only a day away, the Midwest got pounded by severe weather again as a reminder that it’s still officially winter.

Rain, snow and tornadoes are being reported throughout the region, giving us Midwestern baseball fans another reason to want to be in Arizona or Florida right now.

I’ve enjoyed posting photos of snowbound stadiums throughout the winter, but enough is enough already. It’s time for the winter weather to go into hibernation and let baseball weather take over.

Nonetheless, for those who may not have seen all my snowbound stadium photos, here are links to the relevant posts:

Spring training has started, but winter’s not over yet (Fifth Third Bank Ballpark, home of the Kane County Cougars, and Coveleski Stadium, home of the South Bend Silver Hawks)