Posted on September 18, 2011 by Craig Wieczorkiewicz

The Quad Cities River Bandits knocked off the Lansing Lugnuts 6-3 in Game 3 of the Midwest League Championship Series last night, completing their undefeated seven-game run through the playoffs to win the Midwest League title, the team’s first since 1990.

The crowd in Davenport was electric, especially for a playoff game. There were 2,425 people in attendance, well over the 1,419 people who showed up for the first two games of the series in Lansing (502 and 917, respectively). To be fair, it was really chilly during those first two games and it rained for hours before the first game, but still, it seemed the River Bandits had the more enthusiastic fan base. 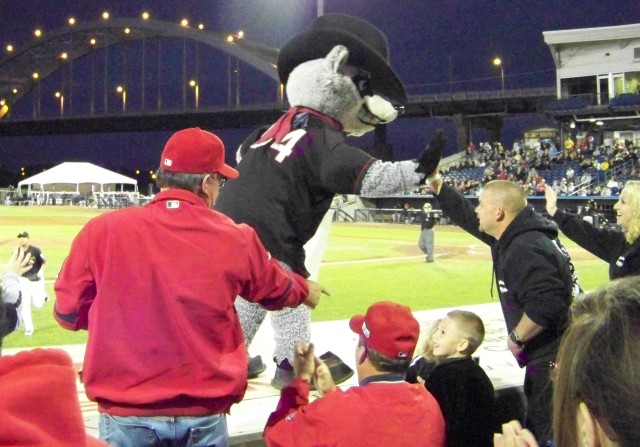 Aside from the enthusiastic fans, I also thought the River Bandits did a much better job than the Lugnuts of making the Midwest League finals feel like what it is — the equivalent of the World Series for their league. For example, all members of both teams were announced on the field before the game, just like you see done before the first game of the World Series and the MLB All-Star Game.

Members of both teams were introduced on the field before the start of the game.

As for the game itself, it followed the same basic formula of every game in the championship series. The Lugnuts scored first, the River Bandits came back to take the lead, and the Lugnuts threatened to tie the score or win in the 9th inning but couldn’t get the job done. In Game 3, the Lugnuts loaded the bases in the 9th, but LF Marcus Knecht, who hit 16 homers and drove in 86 runs during the regular season, flew out to left field to end the game.

The hero of the game for the River Bandits was 1B Jonathan Rodriguez, who drove in three runs. Two of those runs came in the 7th inning on a clutch double that followed an intentional walk of RF Oscar Taveras. It was unusual to see a Low-A intentional walk — I don’t remember seeing any others all season.

Another thing I saw last night that I don’t remember seeing this season was a baseball bat flying into the stands and the fan who grabbed it getting to keep it. It was Lugnuts 2B Matt Nuzzo’s bat. Nobody was hurt in the incident.

All things considered, this was an excellent end to my awesome summer traveling the Midwest League. The atmosphere was electric as the River Bandits completed a memorable postseason run, and my wife was able to be there with me at the end of my journey. My project of traveling to the 16 Midwest League ballparks and writing about it (first on this blog and later in book form) wouldn’t be possible without her support.

Now it’s time for me to shift gears and start writing the book. I have so many notes and photos to go through, I’ll be reliving my Midwest League summer all winter. I plan to occasionally update this blog during the offseason, noting some things about the ballpark experiences that I didn’t already, posting more photos, writing about some of the other things visitors can do in the various Midwest League communities, and probably some general baseball posts, too. If you have any suggestions about what you want to read here during the offseason, feel free to leave a comment or send an email to mwltraveler@gmail.com. As always, I welcome your feedback and I appreciate that you’ve been following my journey. My goal is to have my book completed by next season and then hit the road again to promote it around the Midwest League, so hopefully I’ll get to visit some of my new baseball friends again and meet even more next year.