Posted on September 10, 2011 by Craig Wieczorkiewicz

The first round of the Midwest League playoffs was one out away from being finished when Lansing Lugnuts 2B Matt Nuzzo hit a two-out, two-run homer off Dayton Dragons RP Drew Hayes in the bottom of the 9th inning in Lansing. Nuzzo’s walkoff homer gave the Lugnuts a 3-2 win and tied the series 1-1. Game 3 is in Lansing tonight.

In Bowling Green, the Fort Wayne TinCaps beat the hometown Hot Rods 5-1. Midwest League MVP Rymer Liriano hit a two-run homer as his team eliminated the competition from the playoffs. The TinCaps will play the winner of the Dragons-Lugnuts series Sunday.

In Burlington, where I was last night, the Kane County Cougars beat the hometown Bees 3-2 in the decisive third game of their first-round series. The Cougars were better than the Bees offensively, but they also played sloppy defense that allowed the Bees to stay close all game. 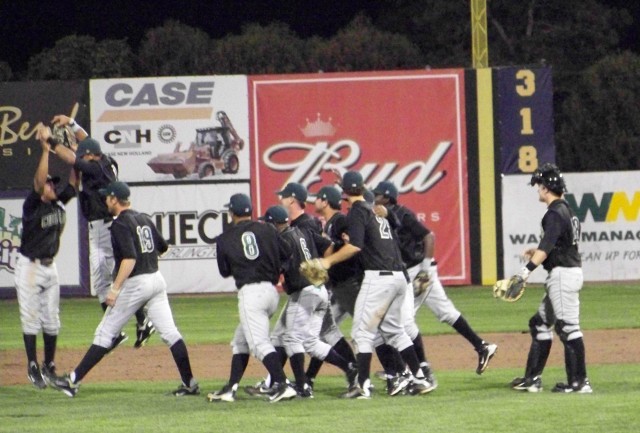 The Kane County Cougars celebrate their playoff series win over the Burlington Bees.

Cougars SP Jason Adam (6-9 with a 4.23 ERA during the regular season) gave up four hits and no earned runs while striking out five in 5 2/3 innings. In the 6th inning, Bees RF Jose Crisotomo doubled with one out and scored when Cougars 3B Cheslor Cuthbert dropped Bees 1B A.J. Kirby-Jones’ two-out popup. Cougars C Kevin David then picked up the ball and threw it into center field as he tried to nail Kirby-Jones at second base. That allowed Kirby-Jones to score. 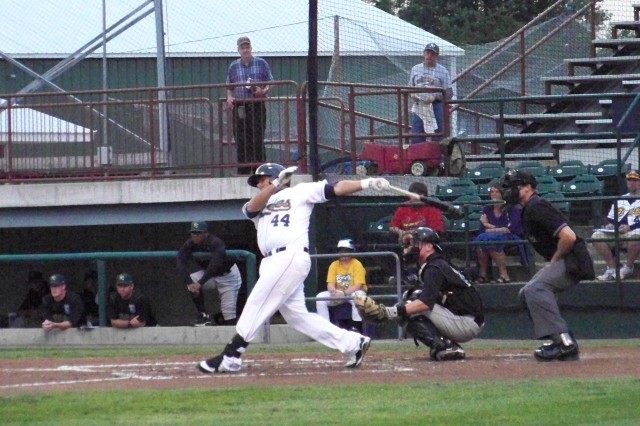 Burlington Bees 1B A.J. Kirby-Jones swings at a pitch during last night's game.

LF Brian Fletcher, CF Brett Eibner and 2B Angel Franco drove in runs for the Cougars. 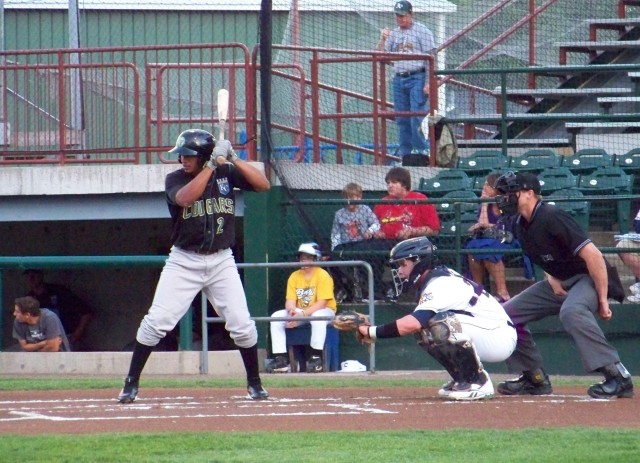 Angel Franco leads off the game for the Kane County Cougars.