Posted on August 17, 2011 by Craig Wieczorkiewicz

Wednesday easily was one of the best days of my Midwest League summer, which is really saying something considering how awesome this baseball season has been for me.

After checking out of my Louisville hotel this morning, I went to the Louisville Slugger Museum & Factory. The museum part is OK, but the real treat is the factory tour. I got to see how Louisville Slugger bats are made (the old way by hand and the new way by machine). It is apparent how much care is given to each bat that is made there. Even though a computerized machine quickly cuts the bats out of wood billets, each one still has to be branded, dipped and the rest, and people do much of that work. Louisville Slugger doesn’t let people shoot photos inside the factory, so you’ll have to settle for a photo of this personalized bat I ordered while I was there: 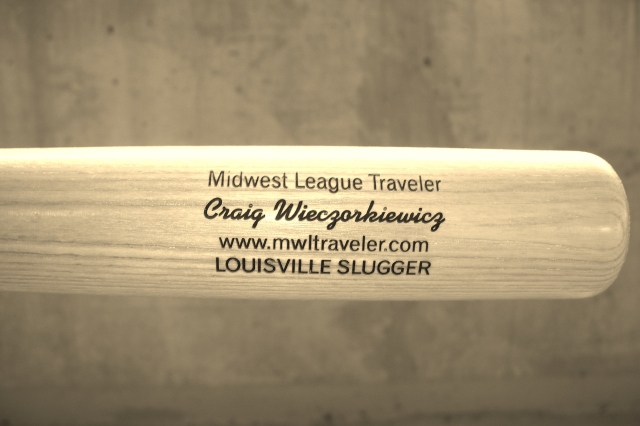 My personalized bat that was made at the Louisville Slugger factory as I toured the facility.

After leaving the Louisville Slugger Museum & Factory, I got onto Interstate 65 and headed south to Bowling Green. I stopped for gas in Horse Cave, Kentucky. It cost just $3.389 per gallon! I already thought that was a good deal (or as good as it’s going to get these days) when, as I left the gas station, I noticed that in the few minutes it took me to fill my gas tank, the price of gas rose 21 cents! Luckily I had arrived in Horse Cave just in time to buy low during the final minutes of the $3.389 price!

Anyway, after I arrived in Bowling Green, I headed straight to Bowling Green Ballpark, home of the Bowling Green Hot Rods. The team’s radio broadcaster, Tom Gauthier, gave me a tour of the facility, which is smaller than several of its Eastern Division counterparts, but in many ways is just as attractive as them. Something unique (for Class A) about Bowling Green Ballpark is the two bullpens are enclosed instead of being in foul territory without any physical barriers separating them from the action on the field. 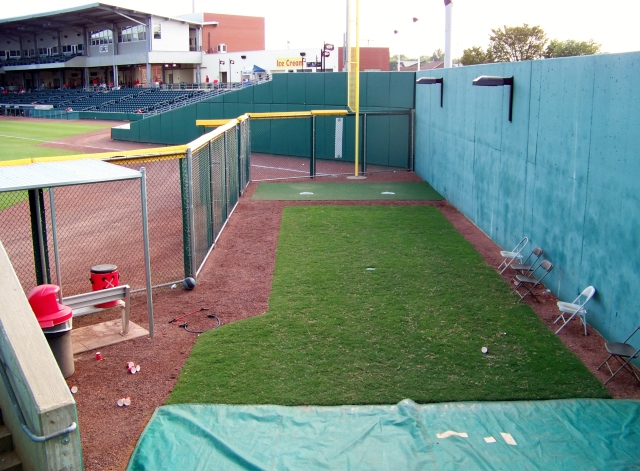 The night game was an exciting one, won 3-2 by the Hot Rods. Bowling Green pitchers, led by SP Enny Romero, struck out 17 Lansing batters! (Romero struck out 10 in five innings, including the first five batters he faced.) The only Lugnuts batter who didn’t strike out was C Jack Murphy, who hit an RBI single in the 6th inning and a home run off the scoreboard to lead off the 9th inning. Lansing LF Marcus Knecht, a top Toronto Blue Jays prospect, struck out four times.

Bowling Green scored early and often enough, starting with a solo homer by SS Derek Dietrich that landed in the berm just to the left of the batter’s eye. I was the only person sitting in the picnic area next to the berm, so I easily retrieved Dietrich’s home run ball. (That made up for the Dietrich home run ball I didn’t get in South Bend earlier this month.) 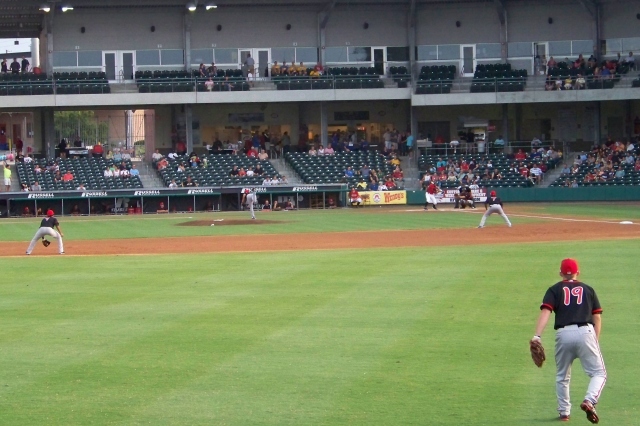 View from the LF picnic area: Lugnuts SP Tyler Powell pitches to Hot Rods SS Derek Dietrich in the bottom of the 1st inning. This is actually the pitch Dietrich hit for a home run.

I spent most of the game in the leftfield picnic area or on the third-base side of the field, but in the 8th inning I decided to switch sides and hang out down the rightfield line. I had a great view of Murphy’s 9th-inning homer hitting the scoreboard and falling straight down out of the ballpark. I peered over the wall and saw where it landed, so after the game ended, I headed to the back of the park and was able to get that home run ball, too! Considering I had to walk halfway around the ballpark to get to it, I was surprised it was still there, but it was and I ended up with both home run balls from Wednesday night’s game between the Hot Rods and the Lugnuts!

I’ll be hard-pressed to duplicate the luck I had on Wednesday. I’ll be back at Bowling Green Ballpark on Thursday, when the first 1,000 fans through the gates get a Corey Hart bobblehead. (The Milwaukee Brewers star is from Bowling Green.)