Posted on August 11, 2011 by Craig Wieczorkiewicz

I had previously been to the ballpark, but that was 10 years ago when the field was still known as Riverview Stadium and hadn’t gone through the renovation that took place before the 2006 season. I honestly didn’t recall much about the place other than it reminded me of Pohlman Field, home of the Beloit Snappers, and I saw then-Cubs prospect Luis Montanez flub a few plays at shortstop for the Lansing Lugnuts. (In 2001, the Lugnuts were a Cubs affiliate and the LumberKings were an Expos affiliate.)

Despite the renovations that took place several years ago, the Clinton stadium still reminds me of Pohlman Field, though it is a notch above it because Alliant Energy Field has a leftfield berm. The selection of food and drinks is not daring or diverse; it basically consists of the same stuff you can buy at any high school or college game. (This also is the case at the other two old-school stadiums in the Midwest League, Beloit’s Pohlman Field and Burlington’s Community Field.) With that said, though, the prices are reasonable for ballpark concessions.

Also reasonably priced are programs ($1), game-day notes (25 cents) and broken bats ($10 for one or $15 for two). I’m tempted to buy a broken bat when I return Friday, but whether I do will depend on the selection available.

Another reason Alliant Energy Field is a notch above Pohlman Field is the inclusion of some small but noticeable LumberKings “things” in the concourse area behind home plate. For example, there is this LumberKings bench …

… and this sidewalk painting: 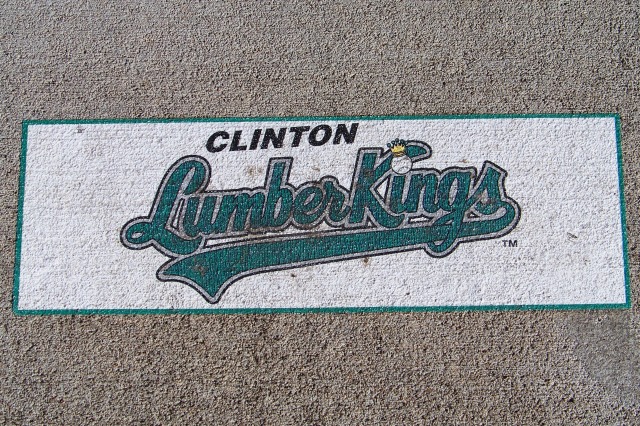 There also is a cool retro-style clock near the entrance, but I’m saving that photo for my post after Friday’s game.

Another little thing the ballpark has that I’m surprised I’ve never seen elsewhere is cup holders next to the urinals in the men’s restroom, solving the age-old problem of where to put your beer when you’re peeing.

Every ballpark should have cup holders next to its urinals.

Here is a photo of the centerfield wall and scoreboard … 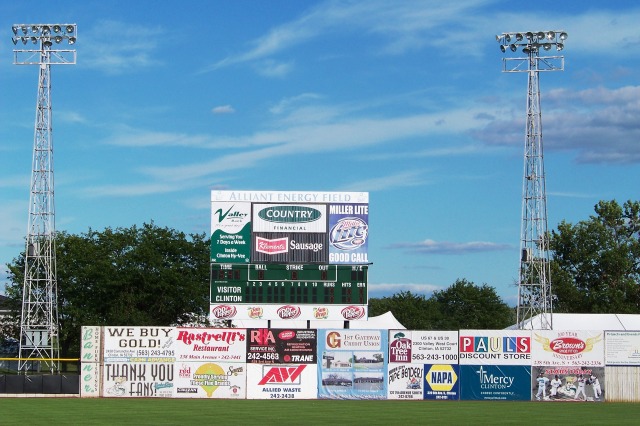 … and here is a photo of Cedar Rapids Kernels SP Justin La Tempa warming up in the visitors bullpen before the game:

The LumberKings won the game 2-0. Clinton SP Taijuan Walker, one of the top prospects in the Seattle Mariners organization, got the win. He had a shaky 1st inning, allowing three hits to lead off the game, but he picked off Kernels leadoff man Travis Witherspoon (a legitimate base-stealing threat) and induced a double play to get out of the inning unscathed. Clinton’s runs came on an RBI single by RF Julio Morban in the 3rd and a solo homer by SS Anthony Phillips in the 4th. 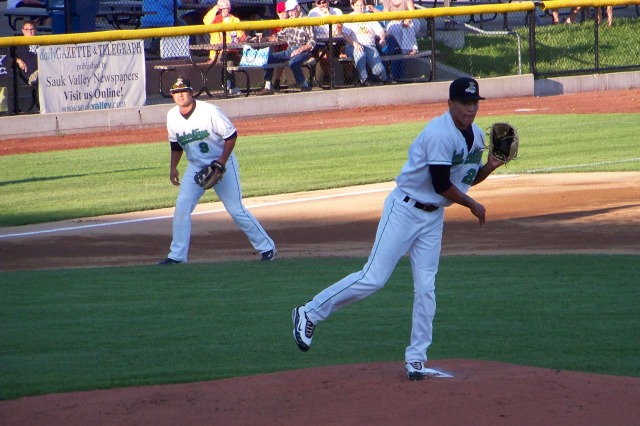 LumberKings 3B Matt Browning watches as SP Taijuan Walker throws to first base in an attempt to pick off Kernels leadoff man Travis Witherspoon. After several attempts, Walker finally got him.

The Klement’s famous racing sausages (of Miller Park fame) were at the ballpark, and they treated the crowd to a footrace after the 6th inning. Chorizo won.

Here is a photo of me with the Hot Dog … 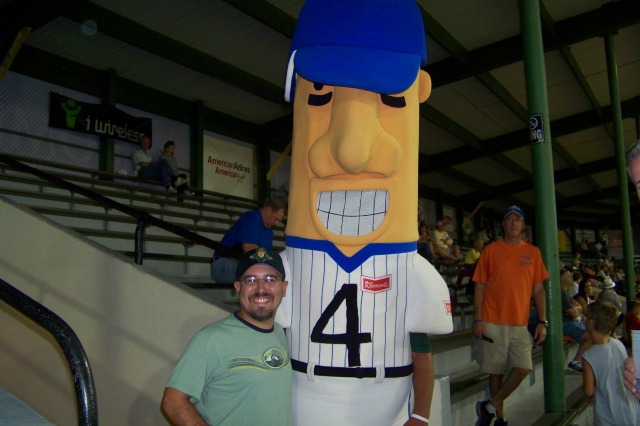 Me and the much-taller Hot Dog, one of the five Klement's racing sausages.

… and finally, here is a photo of a foul ball hit by Kernels 1B Ricky Alvarez. It landed on a pinetar mat, so the guy who retrieved it didn’t want it and gave it to me. I cleaned it as best I could and the Minor League Baseball logo is visible again.

A foul ball hit by Kernels 1B Ricky Alvarez off LumberKings SP Taijuan Walker in the top of the 4th inning.

I’ll be back at Alliant Energy Field for another LumberKings game Friday after crisscrossing northern Illinois to attend Kane County’s “Night of 100 Promotions” tonight.