Posted on August 8, 2011 by Craig Wieczorkiewicz

The gates at Coveleski Stadium open two hours before game time on Sundays, so I entered the ballpark at noon yesterday. I planted myself in the Budweiser Picnic Garden, which is located by the visitors bullpen down the leftfield line. I watched Hot Rods pitchers Victor Mateo and Enny Romero throw in the bullpen and had a brief conversation with pitcher Nate Garcia. (We mainly talked about the humidity and how fortunate Bowling Green players are to be able to wear T-shirts and shorts during batting practice.)

Hot Rods OF Kevin Kiermaier swings away during batting practice.

Unfortunately, heavy rain began falling within 30 minutes of the gates opening, so fans and workers had to seek shelter in covered areas of The Cove. At that time I decided to check out the starting lineups, the league leaders board and the list of South Bend players who went on to play in the major leagues. 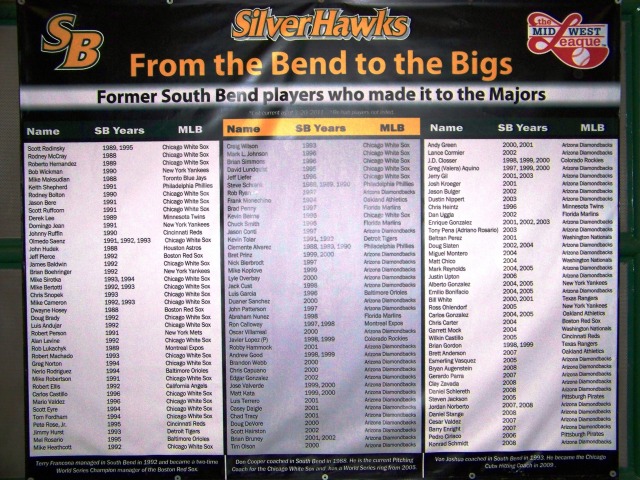 I also revisited the baseball card vending machine (a great idea), which has South Bend team sets from the past decade or so, some Midwest League Top Prospects sets and some major-league cards in it. For $1.75 I was able to buy the Midwest League Top Prospects sets from 1999 and 2000, which I thought was a great deal until I opened them at home and, after looking at the checklists, realized the Adam Dunn card was missing from the 1999 set and the Albert Pujols card was missing from the 2000 set. I can only assume an employee took those cards out of the resealable plastic sleeves they came in before the sets went into the vending machine.

It’s too bad that happened, because otherwise I have nothing bad to say about the friendly people employed by the Silver Hawks. They all were very accommodating, and they even gave me a Justin Upton bobblehead after one of them read on my blog that I didn’t get one when I was at The Cove in June. (I arrived late to the game that day because of a three-hour traffic delay in Chicago. You can read my blog post about that experience here.)

Anyway, I’m glad it rained because I got to see firsthand how much work — or, depending on your perspective, how little work — goes into preparing the field for a game after a torrential downpour. The Cove has an artificial surface; everything is turf except around the bases and the pitching mounds (on the field and in the bullpens). The only parts of the field that had to be readied after the rain were the parts that aren’t turf. There was barely any standing water on the turf because most of the rain quickly soaked beneath the surface, where there is a drainage system. The artificial surface is new this year.

The game started 30 minutes later than scheduled. When Hot Rods starting pitcher George Jensen was announced, the theme song from “The Jetsons” (“Meet George Jetson …”) was played. This pleased me because I hoped that would happen when I saw Jensen pitch in West Michigan last month, but the Whitecaps music maestro apparently wasn’t at the top of his game that day.

Jensen got run support early and often, allowing him to cruise to his 11th win of the season. The Hot Rods beat the Silver Hawks 14-3, led by SS Derek Dietrich (4-for-6 with a HR, two doubles, four RBI and three runs), DH Steve Tinoco (3-for-5 with four RBI and two runs) and C Mayo Acosta (2-for-6 with a HR, three RBI and a run). Dietrich’s 4th-inning homer landed near where I was standing the previous two innings — after I moved from that spot, of course.