Posted on July 6, 2011 by Craig Wieczorkiewicz

The electronic message board outside Cooley Law School Stadium

After watching Peoria Chiefs pitcher Austin Kirk throw a no-hitter Monday, I wondered what I would see next during my Midwest League summer. Turns out a blowout was in order — I saw the Lansing Lugnuts rout the West Michigan Whitecaps 11-0.

This was my first visit to Cooley Law School Stadium (previously known as Oldsmobile Park), home of the Lugnuts. I was impressed with the stadium, inside and outside — despite a few employees having the personality (and in one case, the speed) of a zombie. 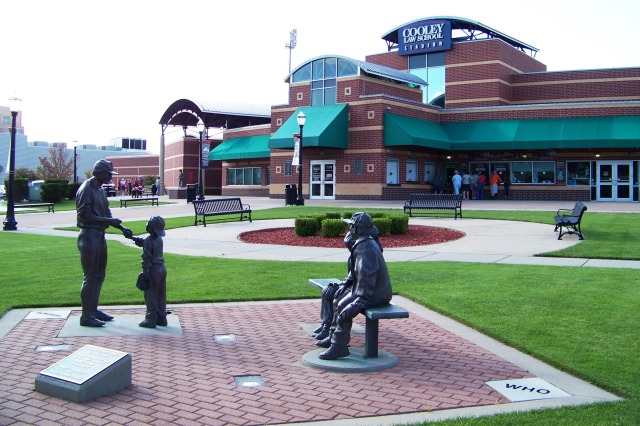 The stadium gets points for its lush, green grass and ivy, its variety of food offerings, and the fun monikers that play off the team’s name. The souvenir shop is named “Nuts and Bolts,” and hungry fans can buy food or drinks at the Bullpen Bar and Grille, Gasoline Alley and the Tailgate Terrace.

On a brick wall near one of the two stadium entrances are plaques commemorating the three inaugural members of the Lansing Lugnuts Hall of Fame: Carlos Beltran, Carlos Zambrano and Brian Dopirak. 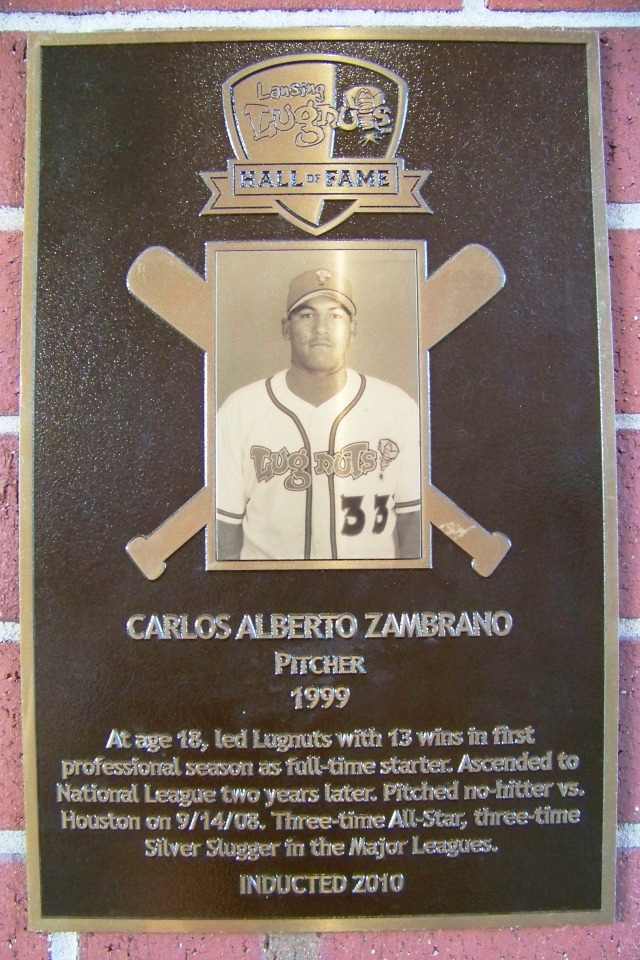 I walked around the inside of the entire stadium before the game started, and it didn’t look like there is a bad seat in the place. It is worth noting, however, that the first-base side should be avoided if possible for evening games on sunny days. As is the case in many minor-league ballparks, those sitting on the first-base side of the stadium have to contend with the sun’s glare throughout most of the game.

The Lugnuts dominated the Whitecaps early and often. Lugnuts starting pitcher Casey Lawrence (6-8, 3.92 ERA) went 8 2/3 innings, striking out six and walking none while holding the Whitecaps to five hits. I’m not sure why manager Mike Redmond removed Lawrence from the game — my theory is he wanted his pitcher to hear the well-earned cheers of the crowd — but Bryan Longpre came in to record the final out.

By contrast, Whitecaps starting pitcher Brian Flynn (1-1, 4.76 ERA) lasted only 1 2/3 innings. Unlike when I saw him pitch against the South Bend Silver Hawks late last month, Flynn had no control in this game. He walked five batters and surrendered a pair of runs before being taken out of the game.

Whitecaps starting pitcher Brian Flynn tosses a ball to a teammate before the game.

The Lugnuts’ offensive assault was led by DH Michael Crouse, who hit a 3-run homer and a 2-run double. LF Marcus Knecht also homered and got three hits, and C Jack Murphy went 3-for-4 with a double and two RBI.

I wonder if Lugnuts catcher Jack Murphy is old enough to remember when the San Diego Padres' ballpark was called Jack Murphy Stadium.